There were many naval warfare experiments conducted during the American Civil War, such as the use of ironclad ships. Other navies had tried various configurations of ironclad ships a few years earlier in the 19th century, particularly during the Crimean War. The Union and Confederate navies began to cover their gun-ships with armor plate so that they could better withstand engagements. The practice showed great promise and the ironclad ships were formidable adversaries for traditional wooden ships in use at that time. 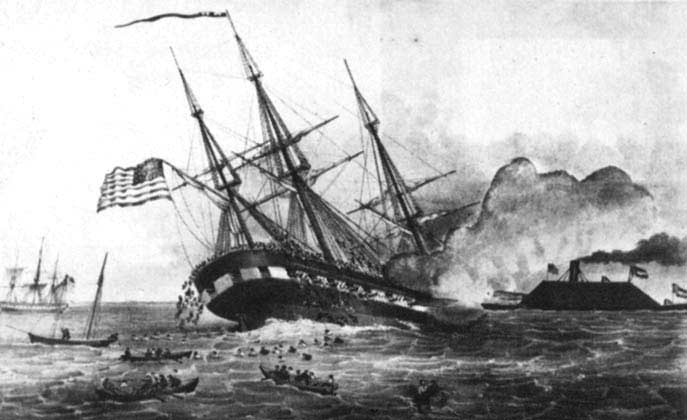 The USS Cumberland (L) was sunk by the CSS Virginia (R) on 08 March 1862 near Hampton Roads, VA.
"Cumberland went down with all her flags flying - destroyed but not conquered."
Copy of lithograph by Currier and Ives.
Photo: Bureau of Ships.
National Archives and Records Administration.
Still Picture Branch; College Park, Maryland.

One of the most famous naval battles of all time is the engagement between the CSS Virginia and the USS Monitor at Hampton Roads Virginia in 1862. The first Confederate ironclad ship, the CSS Virginia, was built from a scuttled Union ship, the USS Merrimac. Confederate forces salvaged the USS Merrimac after they obtained the Norfolk, Virginia Navy Yard that Union forces abandoned on retreat. Upon advancing into Norfolk, the Confederates raised the Merrimac and outfitted it with armor plate. When it became operational, it easily destroyed many of the Union's wooden ships until it encountered the USS Monitor, the Union's first commissioned ironclad ship. This was the first battle in history between two ironclad ships ended in an unusual draw. 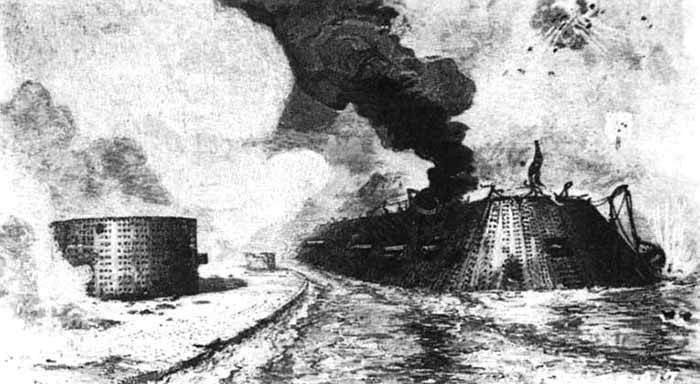 USS Monitor (L) engaging the CSS Virginia (R).
The 09 March 1862 battle between the USS Monitor and the CSS Virginia off Hampton Roads, VA.
The CSS Virginia was formerly known as the USS Merrimac before it was captured and refitted as an ironclad ship.
Copy of engraving by Evans - Photo: United States Army.
National Archives and Records Administration.
Still Picture Branch; College Park, Maryland.

The naval warfare experiences in America during the Civil War, and especially the battle between the CSS Virginia and the USS Monitor, clearly demonstrated that the wooden ship-of-the-line was now obsolete. Other nations took note of the American Civil War naval experiences and accelerated the retirement of wooden ships in navies worldwide. The powerful British Navy rapidly converted to all-metal ships; and eventually, nearly all ships for any purpose including civilian ships and boats would be constructed of metal. 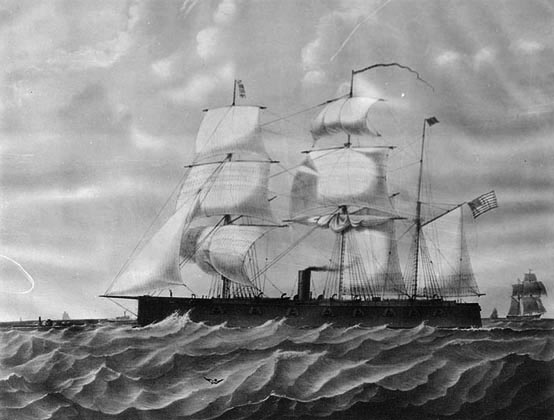 Because one of the main tactics of the Union offensive was to blockade Southern ports, the Southern States developed a fleet of very fast ships to run the blockades. These ships were known as blockade-runners and they had steam power in addition to traditional sails. The blockade-runners had a low profile above the waterline and have inspired the designers of most professional smuggling ships ever since.

As a countermeasure to the Union's blockades, the Confederate States developed the first naval mines. When a ship contacted a mine it would explode and sink the hapless ship. The mines were promising and sank at least forty Union ships. The success with the naval mines led to the development of torpedoes and land mines as well as other similar explosive devices. There is a bit of confusion surrounding the word torpedo from this time period. Generally, the word torpedo was applied to nearly any device with an explosive charge that could be used to destroy something. In current usage, one thinks more of a propelled naval weapon when using the word torpedo, but the other uses are still valid. 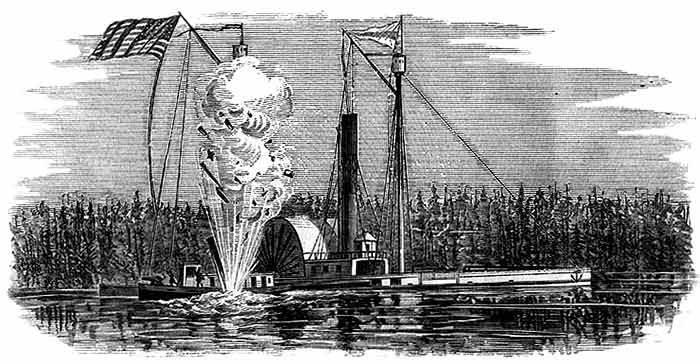 The successes with mining ports to destroy Union ships eventually resulted in their application to ships directly, bringing forth the modern torpedo. One early approach to torpedo warfare was to tow an explosive charge on a line about 200 feet (61 meters) behind a submerged attack craft. After the attack craft had passed beneath the target ship, the towed torpedo would hopefully contact the hull and detonate. This method was soon supplanted by a technique of applying torpedoes directly by means of a spar rammed into the hull of the target ship. Shortly after the war, self-propelled torpedoes became operational. While one would ordinarily not expect a lot of civilian uses for this exact technology it was the precursor to a host of under water propulsion systems for less surly applications.