One important invention that became operational during the Civil War was the Gatling gun. It was one of the first rapid-fire guns and a predecessor of the modern machine gun. It was probably the most successful of the several rapid-fire guns that were developed at about this time. The Gatling Gun has an interesting developmental tale. Its inventor, Richard J. Gatling, set out to create a weapon so devastating that it would make the idea of war so horrible that war would become unthinkable, thus ending all wars. He did succeed in creating a killing machine that was very devastating for its day, but the effect was that it made killing much more efficient, thereby making his invention a complete failure when considered in light of his intended purpose. Nevertheless, it seems that Gatling profited from his work and continued to improve his invention until it fell into disuse.

Gatling guns were large and heavy, weighing about a ton (900 kg); hence, they were usually mounted on wheels. Some models were designed to be mounted on a tripod. Gatling guns were used more frequently as short-range artillery pieces than as infantry weapons due to their cumbersome size and mounting. A drawback with the earliest Gatling guns was that they had problems with the ammunition jamming-up, causing long delays during which they could not be fired. 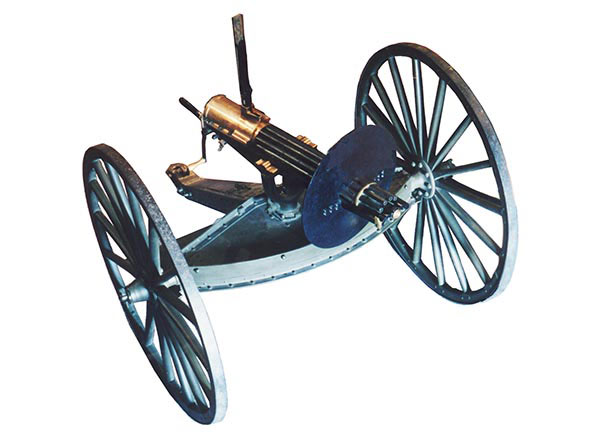 The Gatling gun was not used extensively during the U.S. Civil War. However, it was used widely in the Spanish-American war a few years later. Most ordnance experts considered Gatling guns obsolete until recently. Now, an updated Gatling design has found new use in large-caliber onboard rapid-fire weapons for the A-10 attack airplane and other new pieces of military hardware. Some of the modern artillery pieces that use the Gatling design can fire more than 10,000 rounds per minute.