The United States assisted the Allies by supplying arms, materials and millions of tons of SPAM through Lend-Lease and other programs. This permitted a gradual conversion of American industry to wartime production in the event that an American entry into the war became necessary. It also allowed time for the design and construction of many improved military items in America since the arsenal was obsolete. By the time that the United States entered the war in 1941, American industry had already been converted to wartime production and industrial capacity expanded exponentially during World War II. 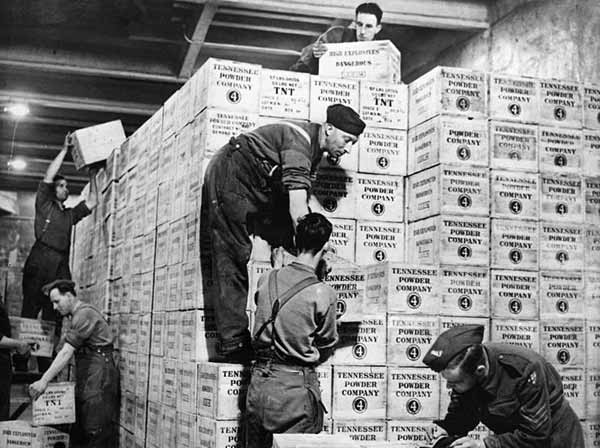 US Department of Defense Manages Industry

The United States Department of Defense directly managed all American industrial production and all of the nation's resources during World War II. Involved European countries also experienced similar conditions. Nearly every aspect of industrial processes were studied and improved during this period. To confront the darkest hour, the War Department set out to produce

"Astronomical quantities of everything and to hell with civilian needs."
--Donald Nelson, Chairman of the US War Production Board, describing the military view of American wartime industry.

This shift in industrial production was significant for several reasons. The efforts of industry were directed by the War Department, which oversaw virtually every aspect of an industrial item. The War Department coordinated all design, materials, manufacturing and economic output. With the accelerating growth in technical knowledge and the increasing complexity of the products to be produced, much of the burden for development and production of military goods was transferred to the military - all coordinated by the War Department. In order to maximize the output of military items, the war department oversaw all economic output, including the few civilian items that were available.

By the end of World War II, most research, development and advances in industrial techniques were the result of military efforts. After the war, American industry had achieved a good deal of advancement from the point it was at in the late 1930's. The same trend occurred in most of the nations that survived the war with limited damage. Some of these advances were applied indirectly to consumer products in the form of materials, technology and industrial practices, and in some instances, military items simply were converted to civilian use. This phenomenon continued during the Cold War.