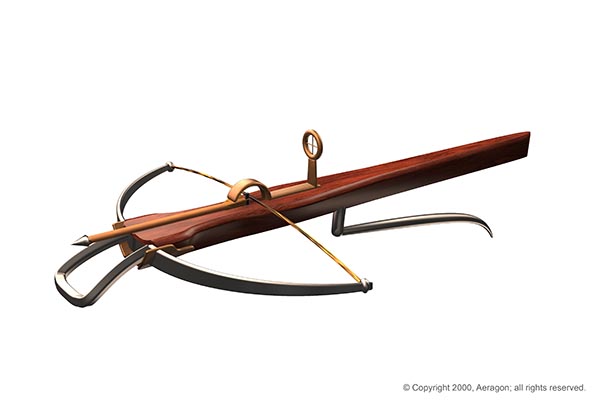 One of the most significant developments in military weapons technology was the crossbow. The Chinese made them in great numbers and by the 2nd century BC were using mass production techniques to make them. Evidence shows that crossbows existed in Greece and Rome where they were eventually developed into the earliest artillery pieces. One type of Roman ballistae was essentially a large crossbow. European crossbows became common by the medieval period.

In the medieval period, crossbows improved to the point that the actual bow part of the weapon had to be made stronger-and-stronger. The first step in improving the strength of the bow was to use composite bows made of wood, horn and sinew. These improvements can be found in weapons dating from the 11th century AD. Later, bows were made in one of the earliest uses of steel, and "crossbow steel" was a term used to designate steel of the highest quality. Steel crossbow members are known from about the 13th century.

Medieval crossbows were made more-and-more powerful to pierce increasingly thicker armor and they eventually featured mechanical cocking mechanisms. By the 14th century, large crossbows that had draw forces of over 1000 pounds, or 454 kilos, were common. As the draw strength became greater, the cocking mechanisms also became more sophisticated and removable rack-and-pinion drawing mechanisms called cranequins were developed. Cranequins were made with mass production techniques that were apparently forgotten for a few hundred years after this period. Some large crossbows were specifically intended for use in siege operations.