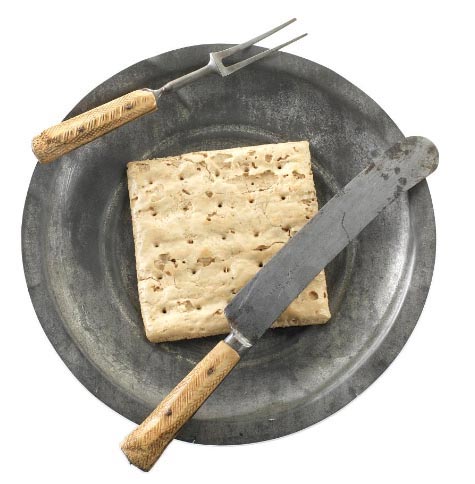 Hardtack is a military food that occurs nearly everywhere and its specific ancient origins are not really known. It is a type of hard bread like a cracker, but much harder. Ancient Egyptians provisioned sailors with a similar bread-type item called dhourra. The Roman military provided a similar food to Roman Soldiers called bucellatum.

The “tack” part of the hardtack word is thought to be derived from a slang term for food used by British sailors. The recipe consists only of flour, water and maybe salt. Hardtack is baked multiple times so that little water remains. This makes it more stable so that it can be stored for very long periods of time - perhaps centuries with modern packaging. It becomes very hard and usually needs to be hydrated in some way to be more edible. 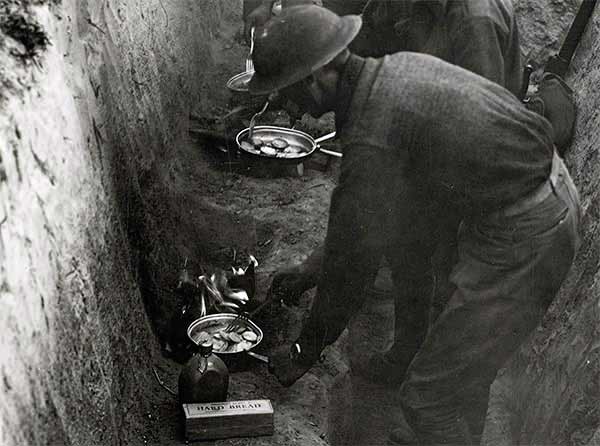 The British Navy provisioned sailors with a pound of hardtack and gallon of beer per day around 1588. The material was being mass produced for the British Navy by 1660. By the time of Queen Victoria (1837-1876), Royal Navy hardtack was manufactured by machine with the dough being mixed and rolled into sheets about 3 feet wide and 6 feet long. This dough was then stamped into about 60 hexagonal biscuits by machine. The stamping included HRH’s seal and quality control identifiers; with even the number of the oven it was baked in stamped into the biscuits. 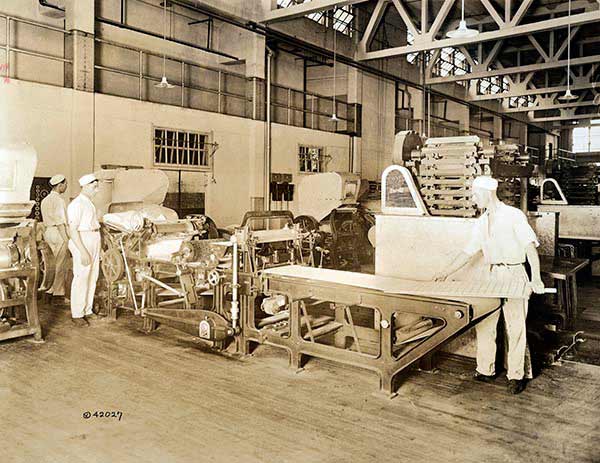 Hardtack was made in large quantities worldwide for military purposes with accompanying lucrative military contracts. Hardtack manufacturing initiated the industrial manufacture and mass production of many foods. Numerous fortunes were amassed producing hardtack for militaries and many large foods manufacturers such as Nabisco and Sunshine were born making hardtack.

"Cracker Castle," built by an army contractor who furnished the Army crackers.
Photograph shows the home of Jonathan O. Pierce, who was a partner in the cracker making business that furnished hardtack for the Union Army, on Chouteau Avenue in St. Louis, Missouri. The house was damaged beyond repair when a tornado hit St. Louis on May 27, 1896.
Photo: G. O. Brown; American Scenery. Baltimore, MD.
Library of Congress. Prints and Photographs Division. Washington, D.C.

Many of the manufacturers of this substance use the word biscuit for this item. Some of the official names given to this food apart from hardtack are brewis, cabin bread, pilot bread, sea biscuit, sea bread and ship’s biscuit. It is most commonly known as hard bread by the US Military Material Command. 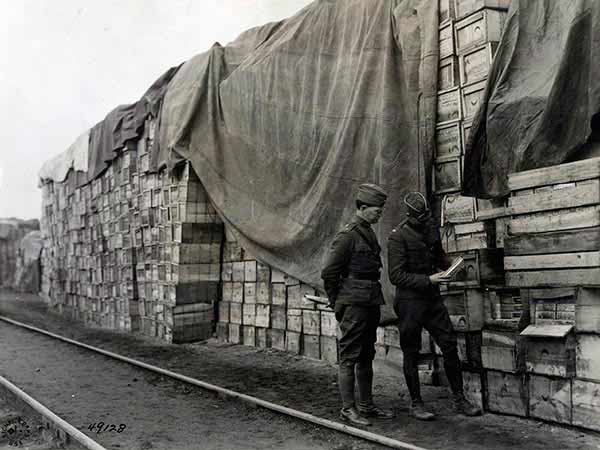 Ten thousand cases of hard bread stored in open at American Embarkation Center. The bread, which is packed in tins, is stored on the outside of the pile while that in the center and less exposed is packed in carton packages. The officers are, 1st Lt. E.E. Hall, Q.M.C., and 1st Lt. P.C. Hunter, Inf. Le Mans, Sarthe, France.
Photo: Sgt. Ryden, US Army Signal Corps, 1 March, 1919.
Department of Defense.
National Archives and Records Administration.
Still Picture Branch; College Park, Maryland.

Some of the slang terms for this item include dog biscuits, molar breakers, tooth dullers, and worm castles. Some Aussie and New Zealand servicemen call them "ANZAC wafers," referring to the acronym for the Australia and New Zealand Army Corps. Germans probably have the most interesting slang term for hardtack. They call it "Panzerplatten," which means armor plates. 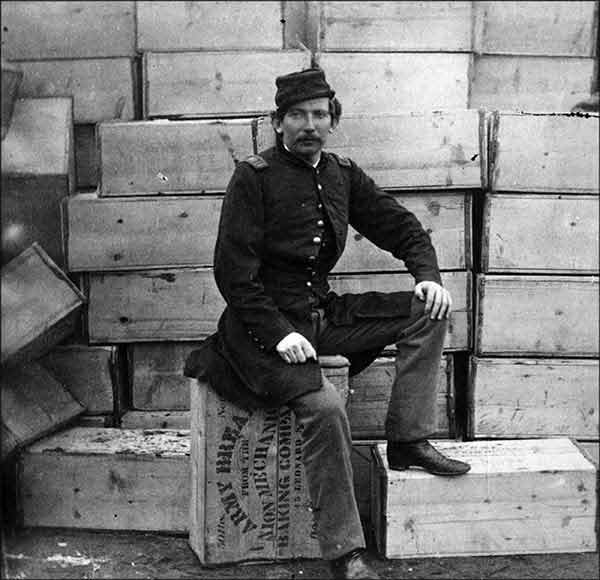 A Union Soldier sitting on crates of hardtack.
There is no necessity to tell the "boys" what this is; they all remember the old chorus of the old army song about "Hard Tack:" "Many days we have crunched you until our jaws are sore, Oh! "Soft Bread" come again once more."
Stereographs of the Civil War, 1861 - 1865.
Library of Congress Collection.
National Archives and Records Administration.
Still Picture Branch; College Park, Maryland.

Hardtack is found in armies and navies worldwide with minor variations and it is still available today in many places. There are also several civilian varieties and it is widely used in Alaska. It is a principle ingredient of authentic New England Clam Chowder. It is also popular with preppers, those concerned with disaster or doomsday preparedness.