Dirigible use continued after 1937, but for the most part, only helium-filled military airships remained in use. Helium was difficult to obtain outside of the United States and few other countries retained their dirigible programs.

By the time that World War II began, the United States Navy was the only military force in the world that had an airship division. Likewise, the only company in the world that maintained an airship program was the Goodyear Tire and Rubber Company. Worldwide, airship designers quit using the rigid design because this configuration was responsible for many of the other problems that airships had experienced. Since airships are enormous, strong winds can cause major structural damage and the rigid type cannot be made strong enough to withstand powerful gusts. The non-rigid type of airship can deform in strong gusts and then return to its original shape as the force subsides.

The United States Navy operated airships for a variety of purposes during World War II. They were primary used as escorts for convoys. The blimps could easily spot submarines and travel with the slow-moving ships. No ships were lost through submarine attack while being escorted by a US Navy blimp. Although the airships were very slow compared to World War II airplanes, none were lost in aerial combat. Blimps were also used to patrol American borders and to lookout for aerial attacks upon the mainland. 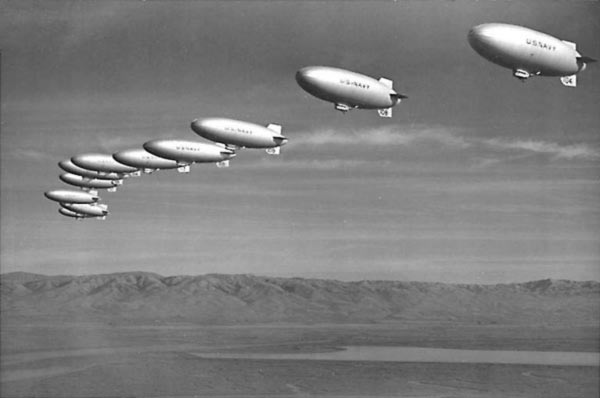