The Parkesine company founded by Alexander Parkes suffered cash-flow problems and the patents were eventually acquired by John Wesley Hyatt of the United States in the 1860s.

In 1870, Hyatt and his brother Isaiah patented a mixture of cellulose nitrate and camphor dubbing the concoction Xylonite. Camphor was an important addition as the plasticizer for this compound that became known as "Celluloid," generally recognized to be the first commercially successful thermoplastic. Celluloid is also known as "French Ivory" in certain instances.

The solid material could be heated until it softened and then molded into various shapes. Hyatt formed the Celluloid Manufacturing Company to manufacture and market these products.

The earliest uses of this material were mostly as substitutes for natural materials such as tortoiseshell, horn and ivory. Ivory became very scarce at about this time in part because billiards became very popular. Since billiard balls were heretofore made of ivory, a great amount of ivory was needed to make them. Ivory comes from elephant tusks; therefore, the supply is limited. 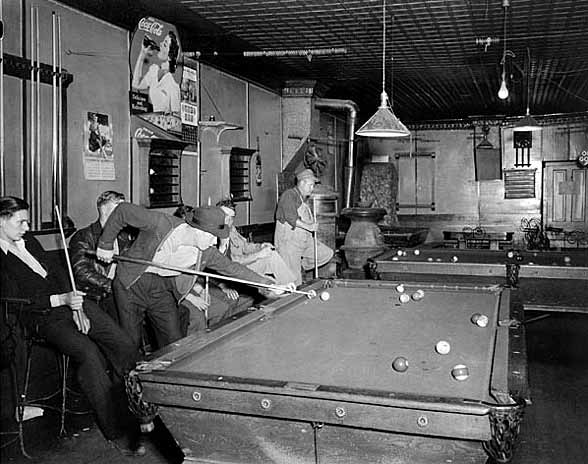 Billiards.
Commercialized entertainment in the village is confined to the movie house, which has films only once every two weeks, and the pool hall, which is looked down upon by many of the community's most substantial citizens. Nevertheless, there are generally a few players to be seen here in the evenings and a particularly large group on Saturday night.
Photo: Irving Rusinow, Shelby County, Iowa, May 2-7, 1941.
Records of the Bureau of Agricultural Economics.
National Archives and Records Administration.
Still Picture Branch; College Park, Maryland.

In keeping with the nitrocellulose origin of these earliest plastics, they were highly flammable. Celluloid and Pyroxylin plastics were only slightly less-flammable than gunpowder. Because they contain both fuel and an oxidizer, combustion is self-propagating. This is to say that if combustion is initiated, it is extremely rapid and cannot ordinarily be extinguished.

Celluloid found long-term and widespread use as film stock for motion pictures. Many movie theaters met their demise when the film became overheated in the projector and set the whole establishment ablaze. In certain circumstances, items made from Celluloid could explode.

Pyroxylin-type plastics began to be replaced by less-flammable alternatives in the 1920s and 1930s. Nevertheless, Celluloid did not disappear. Celluloid plastics are still used in a few applications such as Ping-Pong balls.