The Goodyear Tire and Rubber Company, founded in 1898, became active in the aviation industry in 1910 by selling rubber-impregnated fabric products and resins to aircraft manufacturers. Taking a more direct approach, Goodyear's first balloon was completed in 1912 and the company continued building and flying balloons in competitions thereafter.

In 1916, Goodyear bought space for an aeronautic division near Akron, Ohio. Airship production began at Goodyear in 1917 as America's entry into World War I loomed. Eventually, by the time that Goodyear quit mass-producing airships, the company had manufactured about 350 of them - more than any other company in the world. 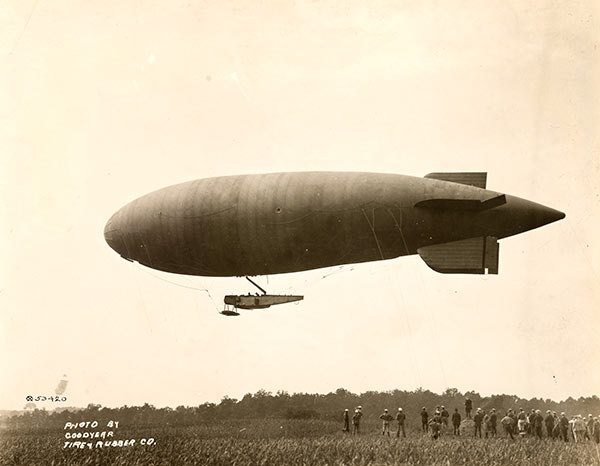 New type of U.S. dirigible. 1 August, 1918.
The dirigible, the most recently developed type of balloon, now commonly known as "blimps".
They are held in shape by the pressure of the gas within.
One of the new government airships starting out from Goodyear Tire and Rubber Company's aviation field, on a flight which lasted six hours.
Photo: Goodyear Tire and Rubber Company.
US Army Air Corps. US Army Signal Corps. Office of the Chief Signal Officer.
National Archives and Records Administration.
Still Picture Branch; College Park, Maryland.

Goodyear began operating its own airships in 1919. However, the public relations blimp program did not begin until 1925 when the company built its first helium-filled airship and named it the Pilgrim. Since then, Goodyear has kept a public relations airship giving many people their only glimpse of one. The company now operates six airships worldwide and three of them operate in the United States. 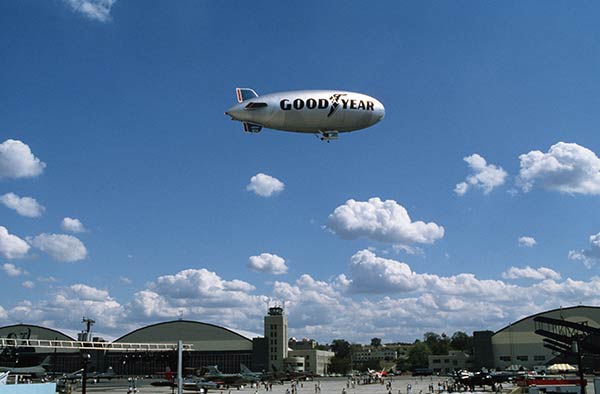 Goodyear Aeronautics developed several interesting military aircraft concepts in the 1950s and early 1960s. Some of these include the GA-22 Duck amphibian airplanes, the GA-33 Inflatoplane and Gizmo, a one-man helicopter. They also built the enormous ZPW-3W airship for the United States Navy, the largest non-rigid airship ever built. Unfortunately, the ZPW-3W was destroyed by strong winds in February of 1962, shortly before the Navy retired the remainder of its airships.