Sir Hiram Maxim, winner of the Légion d'Honneur at the Pâris Exposition International d' Électricité of 1881, is said to have been inspired at the exhibition when he talked with someone that advised him that the sure road to riches was to invent a device that would allow Europeans to kill one another in great numbers. He soon invented the machine gun as well as many other devices.

Maxim also constructed a flying machine in 1893. The machine weighed about 3 1/2-tons or 3175 kilos. To power his flying machine, Maxim developed some special lightweight steam engines that could produce between 160 and 180 horsepower, or 120 to 135 kilowatts, to power his craft - a remarkable accomplishment by itself. In 1894, Maxim's plane lifted off its track in testing and flew about 200 feet, or 61 meters - and then crashed. Maxim continued to develop aircraft, but others soon eclipsed his efforts. 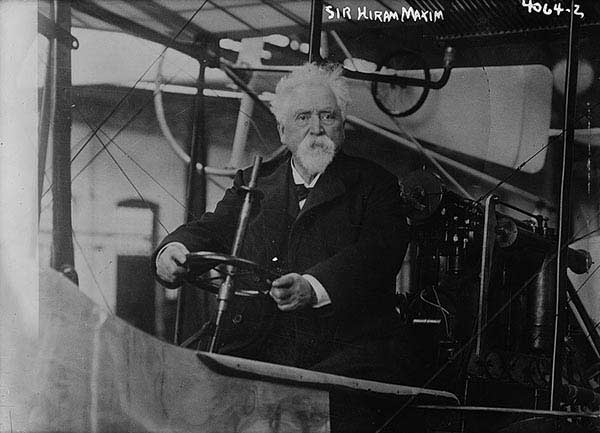 To obtain funding for his second aircraft, Maxim built a model and held a press conference on 4 March, 1904, where he stated that he saw a great future for aircraft as a military engine of war that would be of enormous value to Great Britain. He also announced plans to build captive aircraft for the Earl's Court Exhibition and the Crystal Palace Exhibition. The flying machines were very popular at the exhibitions and they conveyed riders around at nearly 100 miles per hour or 160 kph. Maxim fitted flying controls, meteorological and aeronautical instruments to one of the gondolas allowing him to gather aerodynamic data.