Ministry of Defense ..... and Industry

Leading up to World War II, the Allies were generally a bit slow in meeting the challenge before them. Nevertheless, they did convert to wartime economies with Great Britain being the most successful in the conversion. The UK had many sophisticated weapons in their arsenal before the war began and merely had to increase production. However, in order to meet the needed production levels of military goods, Britain had to compromise its production of civilian items. 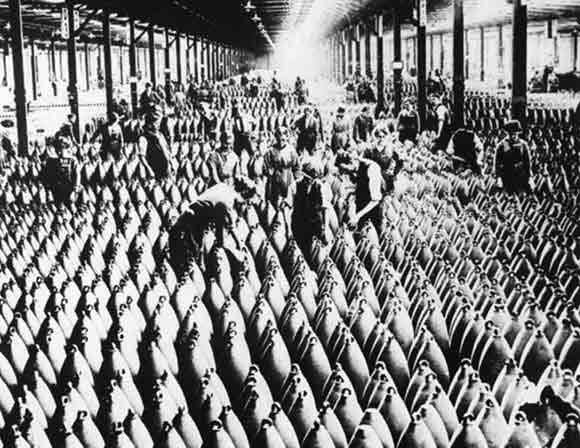 Women working on large shells in a munitions factory in Great Britain.

Since the war was a long one, it was not possible to completely interrupt the production of civilian goods. After all, things wear out and people have to have shoes, clothing and food so that they can work in the defense factories. Therefore, the British military-manufacturing ministries developed special lines of consumer products known as UTILITY products to sustain the civilian population.

UTILITY products were noted for being of good quality and a good value. The designs, while plain, were contemporary and practical. Many used new materials and production methods to use resources frugally.