During World War I, the implementation of emerging technologies such as airplanes, tanks, radios, machine guns, automobiles, trucks and other inventions was frequently extremely awkward. Many of these objects were perfected while being adapted for military use during World War I. Because of the wartime imperative to resupply the lines and to produce newer weapons, manufacturing capacity increased exponentially, both in Europe and in the US, during WW I. 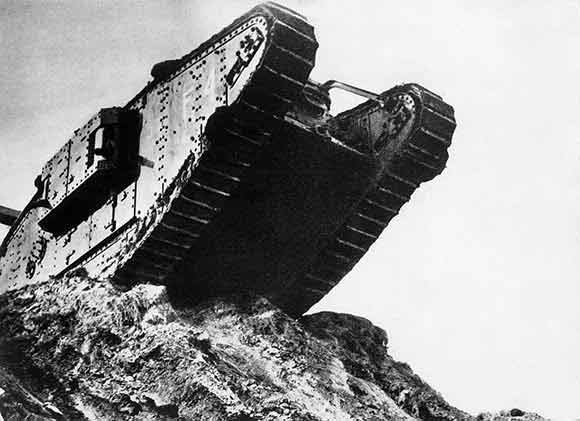 The majority of the tanks involved in the battle were destroyed or scrapped.
Photo: Imperial War Museum.

Since the United States aided the Allies with industrial production they were able to out-produce the Central Powers, or Triple Alliance, and this had a significant effect on the outcome of the war. The United States eventually entered the war in 1917. During the war, the structure of the societies involved changed significantly as did military and industrial methods. At the end of the war most of Europe's remaining monarchies crumbled.