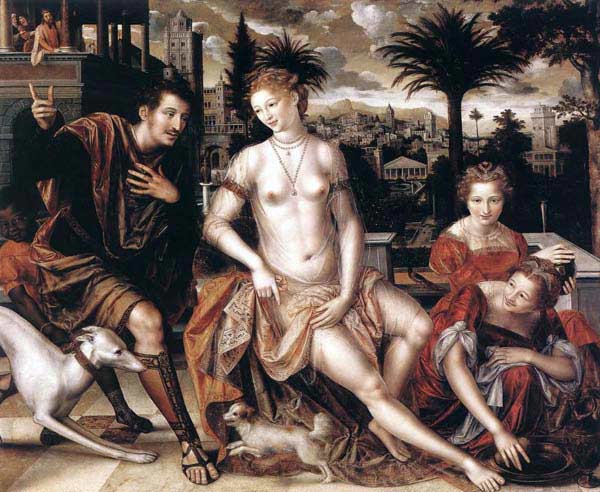 There are few mentions of Solomon in the Bible until shortly before he was anointed king. We are told that he was the son of King David and Bathsheba. As one might recall, King David's relationship with Bathsheba was the cause of much trouble for him, evidently much more than has normally been appreciated. The narrative of these events can be found beginning in 2 Samuel 11.

A short recap of the story of David and Bathsheba begins with David walking on the roof of his palace and spotting the very beautiful Bathsheba bathing. He was infatuated and soon seduced her. Alas, Bathsheba was another man's wife.

David's affair with Bathsheba was fruitful and she summarily sent word to David that conception had occurred. This child was Solomon's older brother that only lived a few days. Unfortunately, this all happened while Bathsheba's real husband Uriah the Hittite was away serving in King David's army. In a failed attempt to cover up this indiscretion, David brought Uriah back to town from the army and arranged for him to have some free time so that he could be with Bathsheba. To no avail, David hoped that Uriah would sleep with her so that her unfortunate manifestation of infidelity would not be recognized for what it actually was. Had this scheme worked, Uriah would have thought that the child was his and everything would have been covered up.

Plagued with ill fate, King David could not get Uriah to sleep with Bathsheba even after many attempts. Finally, David implemented plan B, thereby arranging for Uriah to be placed in the front lines of battle after returning to active duty. When the battle grew fierce, King David had the rest of the troops withdraw from around Uriah correctly surmising that he would be killed. Some might consider this to be murder by proxy.

2 Samuel 12:10 Now therefore, the sword shall never depart from thy house; because thou hast despised Me, and hast taken the wife of Uriah the Hittite to be thy wife. (JPS) (Emphasis added)

Some of the consequences that befell David’s household included the incident(s) of Amnon, Tamar and Absalom; but the first manifestation of judgment was that the child that Bathsheba was carrying whose conception initiated all of these events died seven days after birth. Since it is evident that they conceived Solomon at this time it is apparent that he was of dubious origin.

2 Samuel 12:15 And Nathan departed unto his house. And the Lord struck the child that Uriah's wife bore unto David, and it was very sick. (JPS) (Emphasis added)