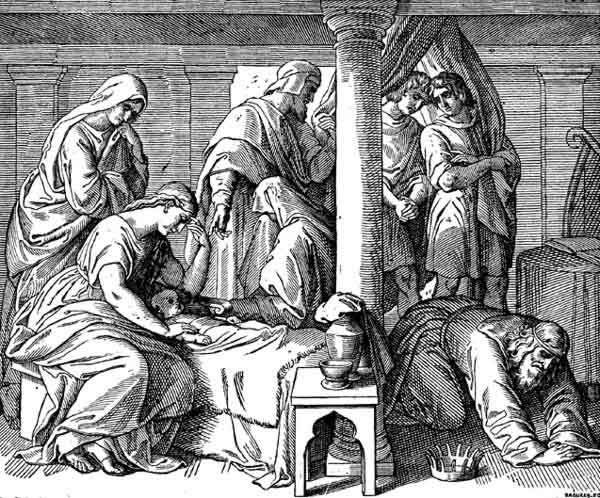 Another distressing aspect of Solomon's conception that is inescapable is that Bathsheba was ceremonially unclean because she had given birth just seven days before Solomon was conceived. David became unclean by touching her, and according to the Mishnah (Kelim 1:3 - 1:5), in this condition he imparted uncleanness to everything under, above or even near him. Please note that the following passage from the 1917 Jewish Publication Society translation calls "sickness" that which would ordinarily be called a menstrual period today.

Leviticus 12:1 And the Lord spoke unto Moses, saying: 2 Speak unto the children of Israel, saying: If a woman be delivered, and bear a man-child, then she shall be unclean seven days; as in the days of the impurity of her sickness shall she be unclean. (JPS)

Leviticus 20:18 And if a man shall lie with a woman having her sickness, and shall uncover her nakedness--he hath made naked her fountain, and she hath uncovered the fountain of her blood--both of them shall be cut off from among their people. (JPS)

Solomon was conceived shortly after his brother died (2 Samuel 12:24). This occurred on the seventh day after Solomon's older brother was born; therefore, both David and Bathsheba should have been cut off from among their people. This could be stated differently with a phrase something like, stricken from the register of Israel, or perhaps cut off from the tents of Jacob, for examples. While it is clear that David was forgiven, does it not seem that the child conceived under these circumstances would technically not be an Israelite? How could the product of such a union be included in the register of Israel? It is impossible.

It is conspicuous that Solomon's parents were unclean and that he was conceived in uncleanness. One could juxtapose that concept with the idea of virgin conception thereby imputing freedom from the Adamic curse for consideration.