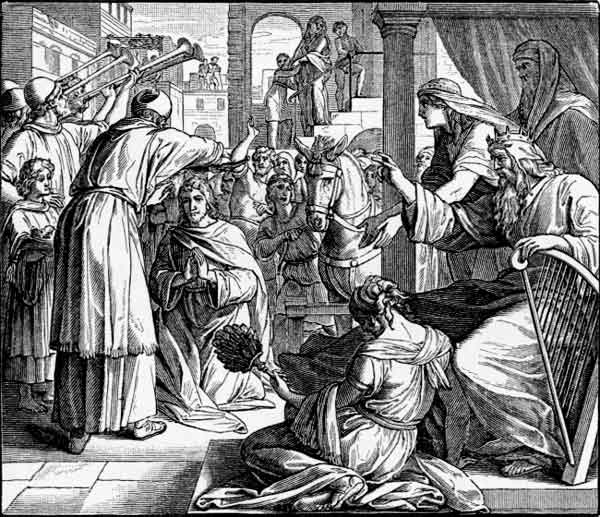 The most significant event involving Solomon consists of his becoming the king of Israel at the age of twelve.

Ecclesiastes 10:16 Woe to thee, O land, when thy king is a boy, and thy princes feast in the morning! (JPS)

As one may recall, Solomon’s kingdom was established after another of David’s sons, Adonijah seemingly set himself up as the next king. Incidentally, the name Adonijah means “my Lord is YHWH,” or more loosely, “the Lord is my master.” Adonijah was also a name that the Israelites used for God. Notwithstanding that this son was named Adonijah, he has traditionally been considered to be an upstart or usurper-type of figure that tried to set himself up to be the king. The accounts about Adonijah and the events leading up to Solomon becoming king are found beginning in 1 Kings 1 and 1 Chronicles 29.

1 Kings 1:5 Now Adonijah the son of Haggith exalted himself, saying: 'I will be king'; and he prepared him chariots and horsemen, and fifty men to run before him. 6 And his father had not grieved him all his life in saying: 'Why hast thou done so?' and he was also a very goodly man; and he was born after Absalom. (JPS) (Goodly means handsome)

As the next-oldest, Adonijah was indeed the rightful heir to the throne since Absalom had died during his adventures.

It is apparent from the accounts about Adonijah in the Bible - that for a substantial amount of time - he went about claiming to be the next king. Furthermore, it is evident that David did not interfere with this for a long time and we are told that David was getting old and in declining health during the period that these events took place. Some Bible scholars have concluded that David never wanted Solomon to be his successor. Nevertheless, the conventional widespread but erroneous view contends that Adonijah is a usurper.