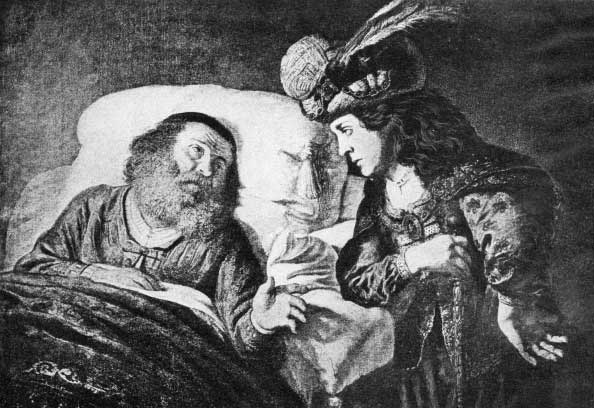 King David’s Charge to Solomon.
From: The Bible and its Story Taught in One Thousand Picture Lessons.
Edited by Prof. Charles F. Horne, Published by Francis R. Niglutsch, 1909.

After Solomon became the king, there were some loose ends from David’s time that David asked Solomon to deal with. Joab, Shimei and the sons of Barzillai of Gilead were these subjects. Solomon also dealt with a priest at this time and this was not a request of King David. All of these incidents are very interesting and it is likely notable that there are no further mentions of the sons of Barzillai of Gilead whatsoever.

2 “I am about to go the way of all the earth,” he said. “So be strong, act like a man, 3 and observe what the Lord your God requires: Walk in obedience to him, and keep his decrees and commands, his laws and regulations, as written in the Law of Moses. Do this so that you may prosper in all you do and wherever you go 4 and that the Lord may keep his promise to me: ‘If your descendants watch how they live, and if they walk faithfully before me with all their heart and soul, you will never fail to have a successor on the throne of Israel.’

5 “Now you yourself know what Joab son of Zeruiah did to me—what he did to the two commanders of Israel’s armies, Abner son of Ner and Amasa son of Jether. He killed them, shedding their blood in peacetime as if in battle, and with that blood he stained the belt around his waist and the sandals on his feet. 6 Deal with him according to your wisdom, but do not let his gray head go down to the grave in peace.

7 “But show kindness to the sons of Barzillai of Gilead and let them be among those who eat at your table. They stood by me when I fled from your brother Absalom.
8 “And remember, you have with you Shimei son of Gera, the Benjamite from Bahurim, who called down bitter curses on me the day I went to Mahanaim. When he came down to meet me at the Jordan, I swore to him by the Lord: ‘I will not put you to death by the sword.’ 9 But now, do not consider him innocent. You are a man of wisdom; you will know what to do to him. Bring his gray head down to the grave in blood.”

10 Then David rested with his ancestors and was buried in the City of David. 11 He had reigned forty years over Israel—seven years in Hebron and thirty-three in Jerusalem. 12 So Solomon sat on the throne of his father David, and his rule was firmly established. (NIV) (Emphasis added)