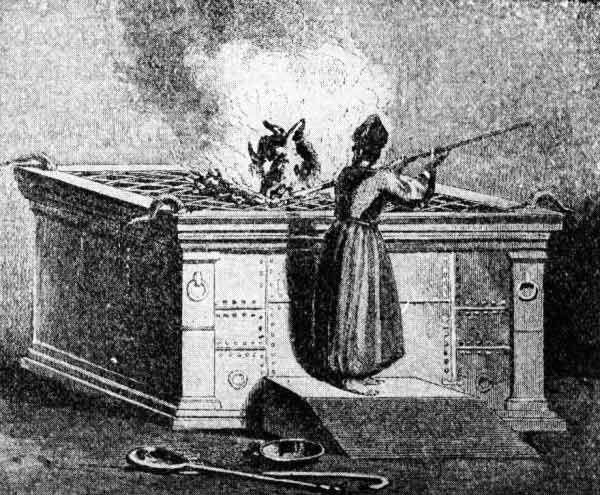 Brazen Altar.
Illustration from: Jesse Lyman Hurlbut's, Story of the Bible, circa 1904.

1 Kings 3:3 And Solomon loved the Lord, walking in the statutes of David his father; only he sacrificed and offered in the high places. 4 And the king went to Gibeon to sacrifice there; for that was the great high place; a thousand burnt-offerings did Solomon offer upon that altar. (JPS) (Emphasis added)

It is astonishing that Solomon went to Gibeon to sacrifice because the altar at Gibeon was the same altar that David would not go before because he was afraid of being struck down by the angel of the Lord that guarded that altar.

1 Chronicles 21:28 At that time, when David saw that the Lord had answered him in the threshing-floor of Ornan the Jebusite, then he sacrificed there. 29 For the tabernacle of the Lord, which Moses made in the wilderness, and the altar of burnt-offering, were at that time in the high place at Gibeon. 30 But David could not go before it to inquire of God; for he was terrified because of the sword of the angel of the Lord. (JPS) (Emphasis added)

It is relevant to recall that since this altar was the one built by Moses in the wilderness then it was the exact same altar that he had covered with the flattened out censers of Korah and his band as a witness to the Israelites not to usurp the duties of the priests, the sons of Aaron. The earth swallowed Korah and his band alive and they went down to the realm of the dead along with everything they had.

Numbers 16:23 Then the Lord said to Moses, 24 “Say to the assembly, ‘Move away from the tents of Korah, Dathan and Abiram.’” 25 Moses got up and went to Dathan and Abiram, and the elders of Israel followed him. 26 He warned the assembly, “Move back from the tents of these wicked men! Do not touch anything belonging to them, or you will be swept away because of all their sins.” 27 So they moved away from the tents of Korah, Dathan and Abiram. Dathan and Abiram had come out and were standing with their wives, children and little ones at the entrances to their tents. Numbers 16:28 Then Moses said, “This is how you will know that the Lord has sent me to do all these things and that it was not my idea: 29 If these men die a natural death and suffer the fate of all mankind, then the Lord has not sent me. 30 But if the Lord brings about something totally new, and the earth opens its mouth and swallows them, with everything that belongs to them, and they go down alive into the realm of the dead, then you will know that these men have treated the Lord with contempt.” Numbers 16:31 As soon as he finished saying all this, the ground under them split apart 32 and the earth opened its mouth and swallowed them and their households, and all those associated with Korah, together with their possessions. 33 They went down alive into the realm of the dead, with everything they owned; the earth closed over them, and they perished and were gone from the community. 34 At their cries, all the Israelites around them fled, shouting, “The earth is going to swallow us too!” Numbers 16:35 And fire came out from the Lord and consumed the 250 men who were offering the incense. Numbers 16:36 The Lord said to Moses, 37 “Tell Eleazar son of Aaron, the priest, to remove the censers from the charred remains and scatter the coals some distance away, for the censers are holy— 38 the censers of the men who sinned at the cost of their lives. Hammer the censers into sheets to overlay the altar, for they were presented before the Lord and have become holy. Let them be a sign to the Israelites.” Numbers 16:39 So Eleazar the priest collected the bronze censers brought by those who had been burned to death, and he had them hammered out to overlay the altar, 40 as the Lord directed him through Moses. This was to remind the Israelites that no one except a descendant of Aaron should come to burn incense before the Lord, or he would become like Korah and his followers. (NIV) (Emphasis added)

Apparently, it has been widely overlooked, but it is conceivable that it was not a good idea for Solomon to go to the altar at Gibeon. It might appear that Solomon obtained a great blessing, but upon further consideration, he apparently received a great curse. 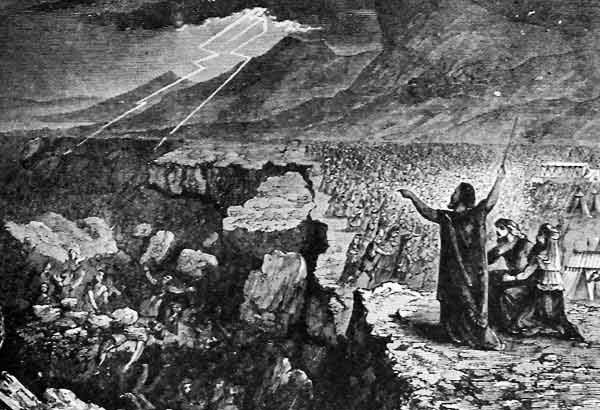 Destruction of Korah, Dathan and Abiram.
Illustration from the 1890 Holman Bible.

It is relevant to consider that there is no note that Solomon ever used the priests for all of the many sacrifices that he allegedly made. There are similar mentions of King David, but when one reads further it becomes clear that the Levites conducted his offerings. Solomon, however, seems to have made the sacrifices himself. In fact, at the opening of the temple it is clear that he led the ceremony. Nevertheless, it was the exclusive duty of the priests to lead the sacrifices.

Leviticus 1:3 “‘If the offering is a burnt offering from the herd, you are to offer a male without defect. You must present it at the entrance to the tent of meeting so that it will be acceptable to the Lord. 4 You are to lay your hand on the head of the burnt offering, and it will be accepted on your behalf to make atonement for you. 5 You are to slaughter the young bull before the Lord, and then Aaron’s sons the priests shall bring the blood and splash it against the sides of the altar at the entrance to the tent of meeting. 6 You are to skin the burnt offering and cut it into pieces. 7 The sons of Aaron the priest are to put fire on the altar and arrange wood on the fire. 8 Then Aaron’s sons the priests shall arrange the pieces, including the head and the fat, on the wood that is burning on the altar. 9 You are to wash the internal organs and the legs with water, and the priest is to burn all of it on the altar. It is a burnt offering, a food offering, an aroma pleasing to the Lord. (NIV) (Emphasis added)

With those considerations clearly in mind, one should question exactly what is going on at Gibeon. While scripture does not say that Solomon burnt incense in this instance, it does seem as if he conducted the sacrifices himself. Subsequently, one will notice that scripture clearly records that Solomon burnt incense on the altar that was before the Lord at least 3 times per year. The altar before the Lord was the altar of incense and this altar was inside the most holy place - a place normally only accessible to the high priest one time a year.

1 Kings 9:25 Three times a year Solomon sacrificed burnt offerings and fellowship offerings on the altar he had built for the LORD, burning incense before the LORD along with them, and so fulfilled the temple obligations. (NIV) (Emphasis added)

The phrase "and so fulfilled the temple obligations" is apparently one of the most loaded verses in all of scripture. One should pause a few minutes and consider what that could possibly mean. There is only one other mention in scripture of a king burning incense before the Lord.

2 Chronicles 26:16 But after Uzziah became powerful, his pride led to his downfall. He was unfaithful to the LORD his God, and entered the temple of the LORD to burn incense on the altar of incense. 17 Azariah the priest with eighty other courageous priests of the LORD followed him in. 18 They confronted him and said, "It is not right for you, Uzziah, to burn incense to the LORD. That is for the priests, the descendants of Aaron, who have been consecrated to burn incense. Leave the sanctuary, for you have been unfaithful; and you will not be honored by the LORD God." 19 Uzziah, who had a censer in his hand ready to burn incense, became angry. While he was raging at the priests in their presence before the incense altar in the LORD's temple, leprosy broke out on his forehead. 20 When Azariah the chief priest and all the other priests looked at him, they saw that he had leprosy on his forehead, so they hurried him out. Indeed, he himself was eager to leave, because the LORD had afflicted him. 21 King Uzziah had leprosy until the day he died. He lived in a separate house--leprous, and excluded from the temple of the LORD. Jotham his son had charge of the palace and governed the people of the land. (NIV) (Emphasis added)

From Gibeon Solomon returned to Jerusalem and offered more sacrifices.

1 Kings 3:15 Then Solomon awoke—and he realized it had been a dream. He returned to Jerusalem, stood before the ark of the Lord’s covenant and sacrificed burnt offerings and fellowship offerings. Then he gave a feast for all his court. (NIV) (Emphasis added) 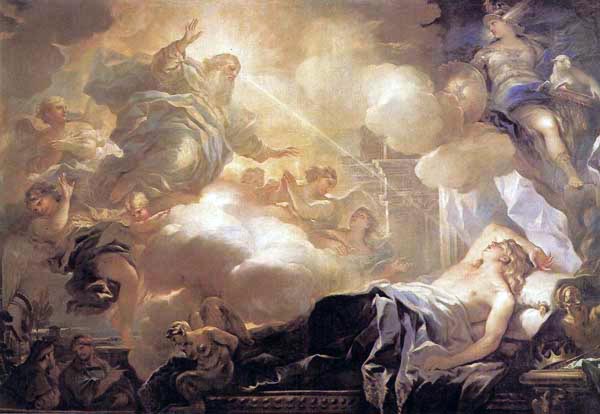