While King Solomon led the dedication ceremony for Solomon’s Temple, one will notice that he knelt in front of the whole assembly of Israel with his hands spread forth toward heaven.

1 Kings 8:54 And it was so, that when Solomon had made an end of praying all this prayer and supplication unto the Lord, he arose from before the altar of the Lord, from kneeling on his knees with his hands spread forth toward heaven. (JPS) (Emphasis added) 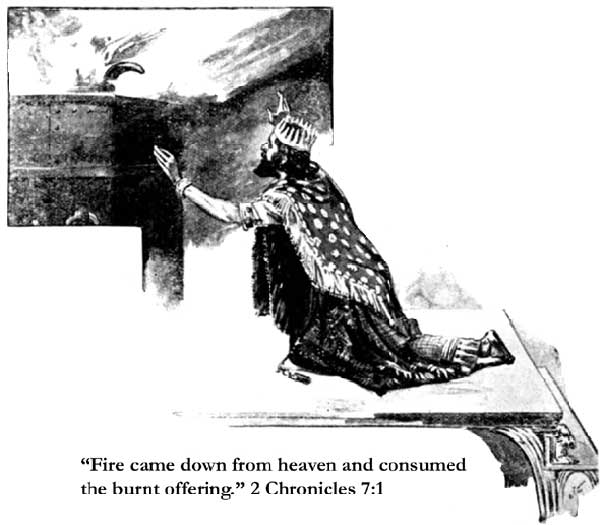 King Solomon Kneeling With His Hands Spread Forth Toward Heaven.

This is significant because this is the first instance in scripture of someone taking this position in YHWH worship. Heretofore, people bowed down or completely prostrated themselves before the Lord. This position is exceedingly irreverent to YHWH because this was the way that the peoples of the land of Canaan worshipped their gods. In all reality, this is a clear indication that Solomon’s heart had already turned against YHWH and he had descended into idolatry. Kneeling with his hands spread toward heaven indicates that Solomon positioned his body upright from the knees somewhat in an “L” shape.

The significance of the fact that Solomon was on bent knee with his hands spread toward heaven is partially due to the origin of this position; that being, that it was commonly used by the peoples of Canaan in the worship of their gods, the Baalim. Chemosh, Milcom and Molech are Baalim. The worship of these gods involved burning infants to death in a particularly gruesome human sacrifice. Therefore, in light of the source of this practice, it would probably be worthwhile to consider the conduct of future worship of YHWH in respect to kneeling and spreading one’s hands toward heaven. 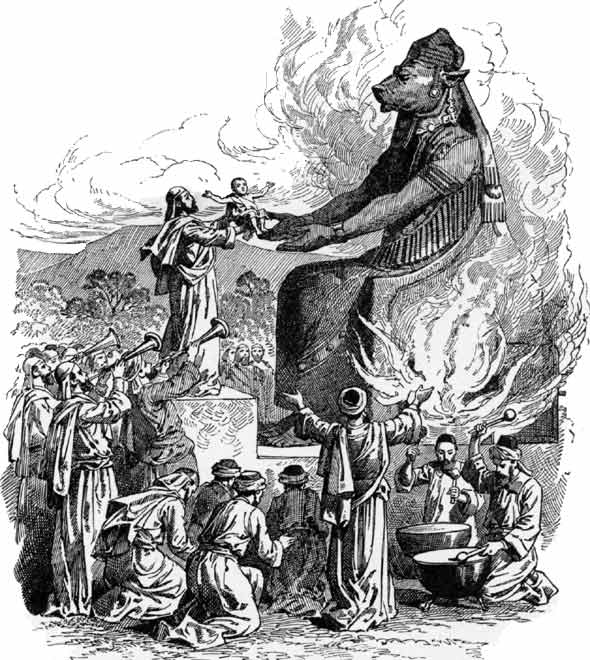 The way that practitioners of the worship of Chemosh, Milcom and Molech conducted their worshipful offerings was by placing an infant into the searing hands of the idol that had been heated red-hot by building a roaring fire inside the metal sculpture. Historians say that the priests would then make great noise with their musical instruments to mask the sounds of the child’s cries. The infant would tend to take a contorted position and form a strange smile. Historians also believe that these idols had some sort of mechanism that moved the arms so that it appeared that the idol was eating. This is frequently termed “passing through the fire” in scripture. 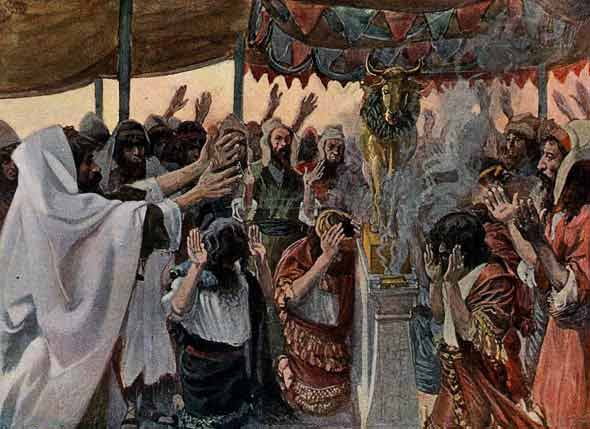 The Israelites Worship the Golden Calf.
Gouache on board.
James Jacques Joseph Tissot.

1 Kings 18:21 Elijah came near to all the people and said,
"How long will you hesitate between two opinions?
If the LORD is God, follow Him; but if Baal, follow him."
But the people did not answer him a word. (NASB) 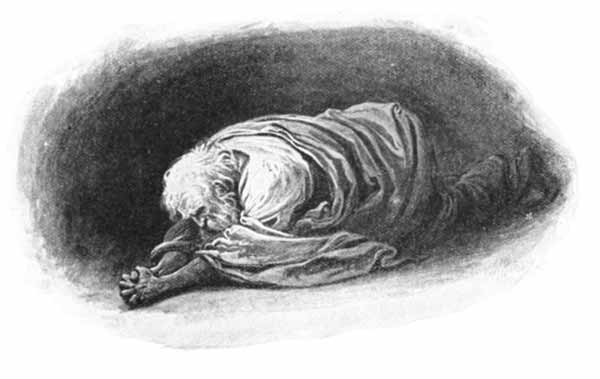 I fell face down (shachah) before the Lord - Deuteronomy 9:25.

Heretofore, scripture indicates that people fell on their faces when in the presence of the Lord. If one looks at the narratives of the events of Moses, he prostrated himself. Abraham, David and about everyone else fell face down. Alternatively, one can observe cases where those that had it correct knelt on the ground placing their heads down between their knees. It seems that this tends to indicate a spirit of humility.

Genesis 17:1 And when Abram was ninety years old and nine, the Lord appeared to Abram, and said unto him: 'I am God Almighty; walk before Me, and be thou wholehearted. 2 And I will make My covenant between Me and thee, and will multiply thee exceedingly.' 3 And Abram fell on his face; and God talked with him, saying: 4 'As for Me, behold, My covenant is with thee, and thou shalt be the father of a multitude of nations. 5 Neither shall thy name any more be called Abram, but thy name shall be Abraham; for the father of a multitude of nations have I made thee. (JPS) (Emphasis added)

Abraham's Servant
Genesis 24:26 And the man bowed his head, and prostrated himself before the Lord. 27 And he said: 'Blessed be the Lord, the God of my master Abraham, who hath not forsaken His mercy and His truth toward my master; as for me, the Lord hath led me in the way to the house of my master's brethren.' (JPS) (Emphasis added)

Genesis 24:52 And it came to pass, that, when Abraham's servant heard their words, he bowed himself down to the earth unto the Lord. (JPS)

Numbers 16:20 And the Lord spoke unto Moses and unto Aaron, saying: 21 'Separate yourselves from among this congregation, that I may consume them in a moment.' 22 And they fell upon their faces, and said: 'O God, the God of the spirits of all flesh, shall one man sin, and wilt Thou be wroth with all the congregation?' (JPS) (Emphasis added)

Numbers 20:6 And Moses and Aaron went from the presence of the assembly unto the door of the tent of meeting, and fell upon their faces; and the glory of the Lord appeared unto them. (JPS) (Emphasis added)

1 Kings 18:36 And it came to pass at the time of the offering of the evening offering, that Elijah the prophet came near, and said: 'O the Lord, the God of Abraham, of Isaac, and of Israel, let it be known this day that Thou art God in Israel, and that I am Thy servant, and that I have done all these things at Thy word. 37 Hear me, O the Lord, hear me, that this people may know that Thou, the Lord, art God, for Thou didst turn their heart backward.' 38 Then the fire of the Lord fell, and consumed the burnt-offering, and the wood, and the stones, and the dust, and licked up the water that was in the trench. 39 And when all the people saw it, they fell on their faces; and they said: 'The the Lord, He is God; the Lord, He is God.' 40 And Elijah said unto them: 'Take the prophets of Baal; let not one of them escape.' And they took them; and Elijah brought them down to the brook Kishon, and slew them there. 41 And Elijah said unto Ahab: 'Get thee up, eat and drink; for there is the sound of abundance of rain.' 42 So Ahab went up to eat and to drink. And Elijah went up to the top of Carmel; and he bowed himself down upon the earth, and put his face between his knees. 43 And he said to his servant: 'Go up now, look toward the sea.' And he went up, and looked, and said: 'There is nothing.' And he said: 'Go again seven times.' 44 And it came to pass at the seventh time, that he said: 'Behold, there ariseth a cloud out of the sea, as small as a man's hand.' And he said: 'Go up, say unto Ahab: Make ready thy chariot, and get thee down, that the rain stop thee not.' (JPS) (Emphasis added)

Matthew 26:36 Then Jesus comes with them to a place called Gethsemane, and says to the disciples, Sit here until I go away and pray yonder. 37 And taking with [him] Peter and the two sons of Zebedee, he began to be sorrowful and deeply depressed. 38 Then he says to them, My soul is very sorrowful even unto death; remain here and watch with me. 39 And going forward a little he fell upon his face, praying and saying, My Father, if it be possible let this cup pass from me; but not as *I* will, but as *thou* [wilt]. (Darby)
(Emphasis added)

Yoma 6:2:D When the priests and the masses standing in the courtyard would hear the expressed Name of the Lord uttered by the high priest, they would kneel and bow down and fall on their faces and say, "Blessed be the Name of the glory of His kingdom forever and ever." (Mishnah)

While those considerations are telling enough, the importance of this goes far beyond them because the position of being prostrate on the ground is denoted in Hebrew by the word “shachah,” dg"s, (segad). Apart from shachah being the Hebrew word describing that exact position, it is also the exact Hebrew word meaning to fall down flat, worship, reverence, obeisance and submission. Concisely, this word actually means worship. If anyone were to worship YHWH, “shachah” is how it is done. That is to say, that position is worship and worship is that position. Therefore, anything other than prostrating oneself face down is really not “worship” at all.

Hebrews 12:28 Wherefore let us, receiving a kingdom not to be shaken, have grace, by which let us serve God acceptably with reverence and fear. 29 For also our God [is] a consuming fire. (Darby) (Emphasis added)

Spreading forth one’s hands toward heaven is a distinctively irreverent act – unless perhaps an individual is worshipping Ba’al. There are mentions of this practice in subsequent scripture after the time of Solomon, but not before, and it is a conspicuous occurrence in some contemporary Christian services and death metal concerts. In light of its apparently Satanic source, it would probably be good for worshipers to carefully consider the Hokey-Pokey since it is irreverent and highly suspect. After all, apparently that’s what it’s all about. 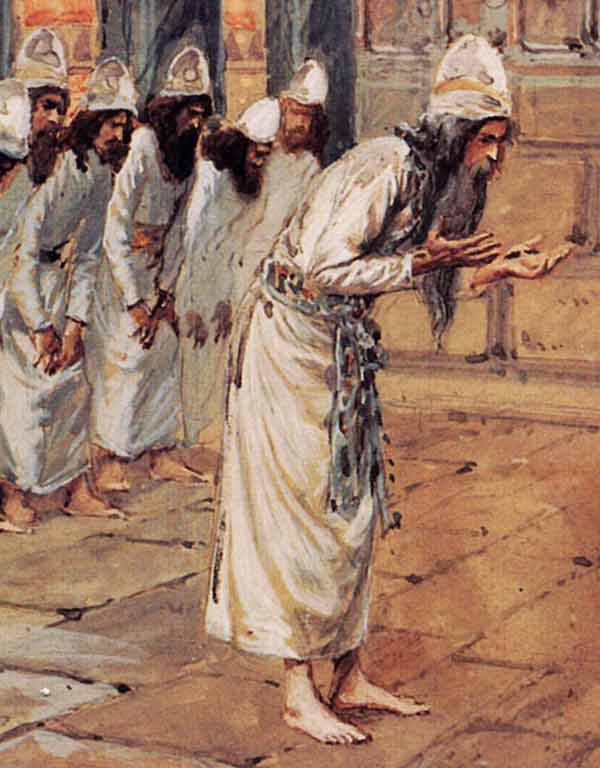