Solomon presided over the temple dedication upon a special platform that he had made for this occasion. 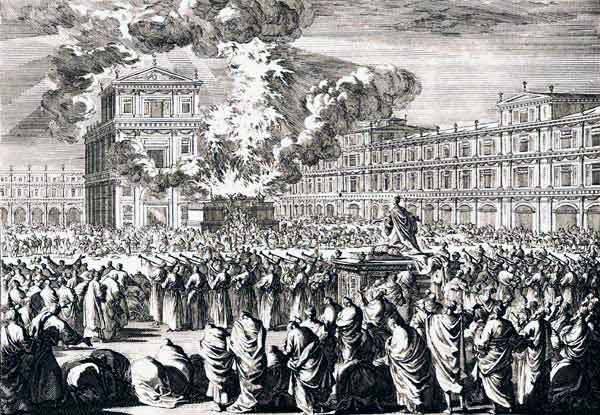 King Solomon Prays at the Dedication.
Dedication of Solomon's Temple.
David Martin, 1639-1721.
Otto Elliger engraving shows the dedication of the Temple with large numbers of animals sacrificed on the altar, trumpets blown, and a cloud filling the house of the Lord.

In synagogues, similar platforms made of various materials and design are almost always found. They are called the Almemar meaning "the chair" or "the pulpit." Rabbis use this chair, pulpit and platform for reading the law. Over time, there have been changes to the Almemar and in some cases its placement has changed. Generally, in earlier times it was placed in the center of the facility.

The name Almemar also has the variation due to language of the name bema or bemah. Such a platform and seat is apparently mentioned in Nehemiah 8:4.

Nehemiah 8:1 all the people gathered themselves together as one man into the broad place that was before the water gate; and they spoke unto Ezra the scribe to bring the book of the Law of Moses, which the Lord had commanded to Israel. 2 And Ezra the priest brought the Law before the congregation, both men and women, and all that could hear with understanding, upon the first day of the seventh month. 3 And he read therein before the broad place that was before the water gate from early morning until midday, in the presence of the men and the women, and of those that could understand; and the ears of all the people were attentive unto the book of the Law. 4 And Ezra the scribe stood upon a pulpit of wood, which they had made for the purpose; and beside him stood Mattithiah, and Shema, and Anaiah, and Uriah, and Hilkiah, and Maaseiah, on his right hand; and on his left hand, Pedaiah, and Mishael, and Malchijah, and Hashum, and Hashbaddanah, Zechariah, and Meshullam. 5 And Ezra opened the book in the sight of all the people--for he was above all the people--and when he opened it, all the people stood up. 6 And Ezra blessed the Lord, the great God. And all the people answered: 'Amen, Amen', with the lifting up of their hands; and they bowed their heads, and fell down before the Lord with their faces to the ground. (JPS) (Emphasis added)

According to the Jewish Encyclopedia, the Almemar is the object referred to as the seat of Moses in Matthew 23: 2-3.

Matthew 23:1 Then Jesus spoke to the crowds and to his disciples, 2 saying, The scribes and the Pharisees have set themselves down in Moses' seat: 3 all things therefore, whatever they may tell you, do and keep. (Darby) (Emphasis added)

Drawing a conclusion from all of that, apparently Solomon plunked himself down into the seat of Moses - probably not a good idea for one to do uninvited.

The article on the Almemar in the Jewish Encyclopedia contends that every 7th year a bema was erected for the king to read the prescribed section of Deuteronomy 31:10-11. This does seem to leave a considerable problem, however, in light of the content of that passage.

Deuteronomy 31:9 And Moses wrote this law, and delivered it unto the priests the sons of Levi, that bore the ark of the covenant of the Lord, and unto all the elders of Israel. 10 And Moses commanded them, saying: 'At the end of every seven years, in the set time of the year of release, in the feast of tabernacles, 11 when all Israel is come to appear before the Lord thy God in the place which He shall choose, thou shalt read this law before all Israel in their hearing. 12 Assemble the people, the men and the women and the little ones, and thy stranger that is within thy gates, that they may hear, and that they may learn, and fear the Lord your God, and observe to do all the words of this law; 13 and that their children, who have not known, may hear, and learn to fear the Lord your God, as long as ye live in the land whither ye go over the Jordan to possess it.' (JPS) (Emphasis added)

There was something that was the duty of the king to read, however, it does not appear that it was to be read publicly.

Looking beyond those considerations, those familiar with the New Testament might notice that the word bema is a significant term in that it is the word used in some translations to describe the throne that Messiah will use to judge the saints. This term is sometimes rendered the reward seat of Christ.

This concludes the examination of Solomon's priestly activities that will be considered here.