The first known rockets in history appear to have been made for military purposes and it was not until the late-1950s that rockets had any known ostensibly civilian applications. The first time that a civilian space program even existed was when the National Advisory Committee for Aeronautics (NACA) was turned into the National Aeronautics and Space Administration (NASA) on October 1, 1958. The first rockets used in the so-called civilian space program were military rockets developed by the US Army Missile Command as long range surface to surface missiles. Before the creation of NASA, a military Jupiter–C rocket launched the US’s first satellite, Explorer One, into orbit in 1958. Another military rocket, the Juno III, launched the first US lunar probe, Pioneer IV, on 3 March 1959.

The division between civilian and military space activities has always been somewhat vague and the establishment of a civilian space program was the result of political posturing during the Cold War. The original civilian purposes for the space program were more nearly Cold War propaganda than fact. Eventually, as the space program matured and the Cold War cooled, civilian space missions became more common. In any event, research from space programs produced many new materials, industrial processes and revolutionary improvements for the home and consumers. Military activities played a key role in space research and the spin-offs that followed. 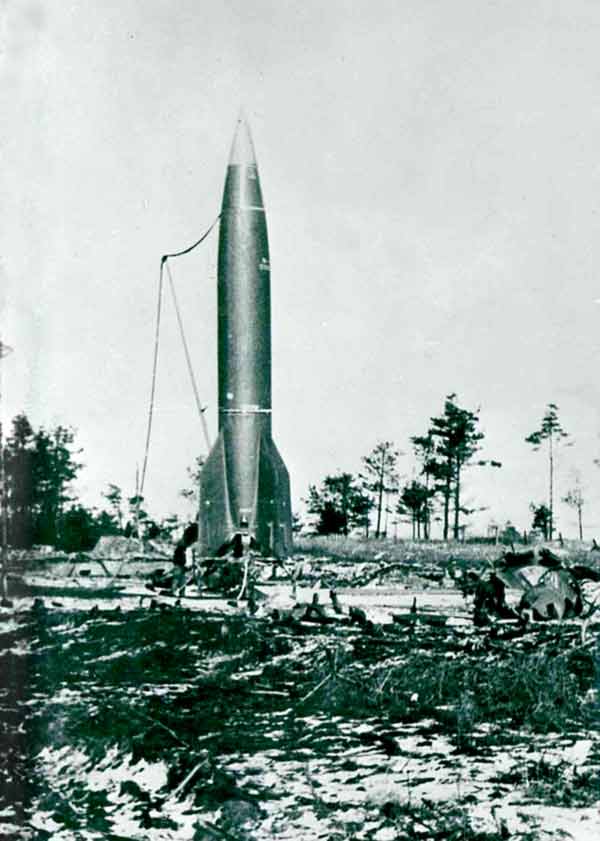 German V-2 Rocket.
This is a copy of a photo found in the possession of a German prisoner, which is believed to be a V-2 (guided missile). U.S. Seventh Army, European Theater.
Department of Defense. Department of the Army.
National Archives and Records Administration.
Still Picture Branch; College Park, Maryland.