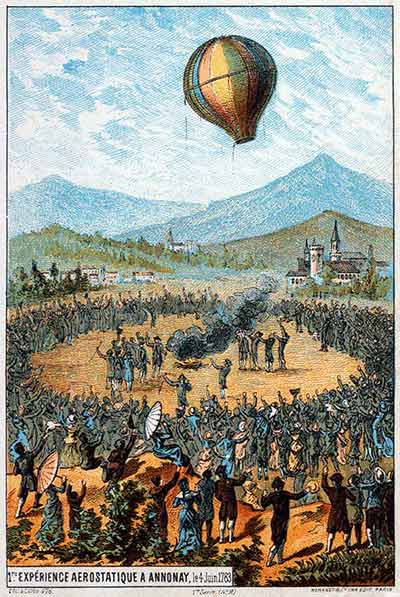 No. 2. First aerostatic experiment at Annonay, 4 June 1783.
No. 2. 1re expérience aerostatique a Annonay, 4 Juin 1783.
Chromolithograph: Romanet & cie., imp. edit., between 1890 and 1900.
Collecting card of event in ballooning history from 1783.
Library of Congress Prints and Photographs Division Washington, D.C.

The first known success at any type of flight was in France. Two brothers from Annonay, Joseph-Michel and Jacques-Étienne Montgolfier, launched the first hot-air balloon in June of 1783. Their first balloon was made of paper and they held it above a fire filling it with smoke which gave it lift. 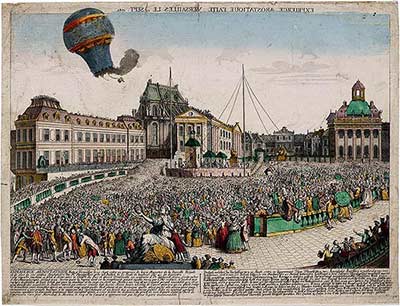 Animals in Test Flight.
To see if the upper atmosphere would sustain life, on September 19, 1783, Joseph (1740-1810) and Etienne (1745-1799) Montgolfier sent aloft a rooster, a sheep, and a duck in a balloon they designed. Released at Versailles before Louis XVI and Marie Antoinette, the hot-air balloon soared to about 1,700 feet before landing safely two miles away with all aboard still alive. One of the first to reach the cage was Jean-François Pilâtre de Rozier, who would become the first man to fly, and later to die, in a balloon.
Anonymous hand-colored etching, 1783. Tissandier Collection.
Library of Congress, Prints and Photographs Division, Washington, D.C.

In September of the same year, the king of France, Louis XVI and his family witnessed the first balloon flight to carry living passengers. The world's first air passengers were a cock, a duck, and a sheep. In October, Jean-François Pilâtre de Rozier unofficially became the first human being to ascend in a balloon. King Louis thought that the experiment might be dangerous and suggested that the Montgolfiers use a condemned criminal for the passenger. However, Pilâtre de Rozier, the king's historian, argued that it would be a great honor to be the first person aloft and Louis conceded and allowed him to make the flight. The flight in a tethered balloon lasted about 4 1/2 minutes and reached an altitude of 84 feet. Later, in November of 1783, de Rozier and a passenger made the first official manned flight in a balloon. Their free balloon flight lasted about 25 minutes and reached an altitude of about 500 feet flying over a large portion of Paris. The first balloons were usually free balloons meaning that they floated freely on the wind and it determined their course. Captive balloons are tethered to the ground with cables so that they do not float away on the wind. On January 17, 1784, the Montgolfiers built a very large balloon which successfully carried seven passengers on a trip over the city of Lyon at an altitude of three thousand feet. Balloons were known as Montgolfiers in the early days of aviation. 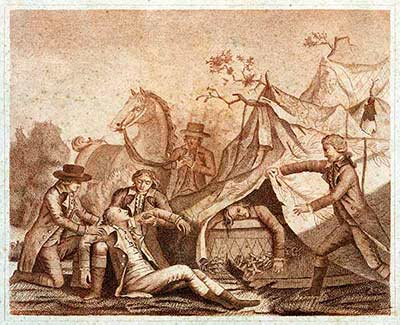 The historian serving the King of France, Jean-François Pilâtre de Rozier, continued to enjoy ballooning and he began to experiment with a combination of hydrogen and hot-air to lift his balloons. This eventually proved to be a bad idea and Pilâtre de Rozier's ballooning career and life ended when he discovered that hydrogen gas is explosive. Nevertheless, the flamboyant historian secured a place in history that can never be supplanted as not only the first person to fly, but also, the first person to die in an aerial accident.

Early hot-air balloons had several problems, one being that they only stayed aloft as long as the air inside them remained warm. Re-heating the air while aloft was dangerous because sparks from the fires carried aboard to reheat the air frequently ignited the balloon fabric. It was not until after World War II that the propane burner for hot-air balloons was invented.