Mechanical explosions occur due to physical reactions such as overheating a whole potato or egg in a microwave oven. This phenomenon has few applications in engineered explosives, but sometimes this method is used and in those cases it is usually powered by compressed air.

Explosives are defined as materials (chemical or nuclear) that can be initiated to undergo very rapid, self-propagating decomposition that results in the formation of a more stable material, the liberation of heat, or the development of a sudden pressure effect through the action of heat on produced or adjacent gases. All of these outcomes are the result of the liberation of energy from the original material. 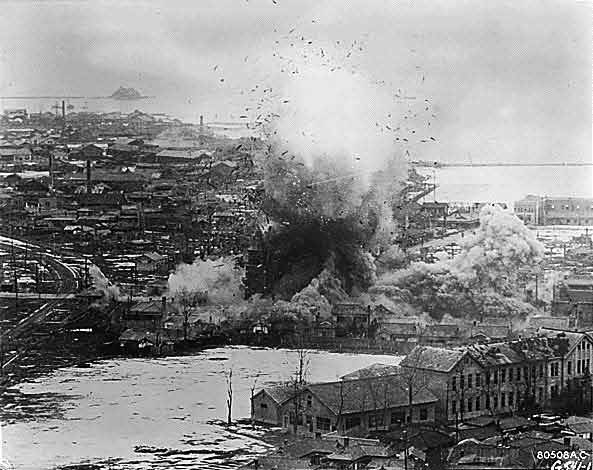 Costly Visit - Immediate explosion from a direct hit made by a B-26 Invader light bomber on a church containing Communist high explosives. This photo was taken the second after the 452nd Light Bomb Wing's plane had dropped its bombs directly on target. Wonsan Harbor on the East Coast of Korea is shown in the background while buildings of the military supply area in the foreground are shown damaged from previous strikes - circa March 1951.
Photo: United States Air Force Command.
National Archives and Records Administration.
Still Picture Branch; College Park, Maryland.

Chemical explosions occur in substances that burn extremely rapidly. Although there are many common substances that can produce respectable explosions such as gasoline, these types of materials are not usually classed as explosives because they must obtain their oxidizer from the air, this being the essence of a non-self-propagating material. Generally, chemical explosives are substances where the fuel and oxidizer are combined in the same material thereby causing the reaction to be self-propagating. While some explosives must be physically confined to obtain detonation, others do not.

In the general model sense, a chemical explosive contains both an oxidizer and a reducer. The reducing agent such as a metal ion burns to produce hot gasses. The oxidizer is a radical that gives up oxygen atoms to support the combustion.

There are fine points as to what constitutes a chemical explosive and what does not. For a substance to be classed as an explosive it must decompose or rearrange itself very rapidly upon the application of an initiating force such as shock or heat and its combustion must produce gases and/or heat. In most cases, the amount of gases produced is key because the rapid expansion of gases is the characteristic that makes an explosion. Nevertheless, the heat of combustion is the factor that makes the gases expand rapidly enough to create an explosion. In some cases, the process produces mostly heat and those materials can be exploited for that particular attribute. In the case where gasses result, these factors make the material occupy a much larger volume that it did originally in a very short time.