The giant and luxurious Hindenburg was the largest airship ever built. It was 803 feet long and 135 feet wide, or 244.7 meters by 41.2 meters, and it was completed in 1936. The Hindenburg made 54 successful flights, 36 of which were transatlantic crossings. It went out of existence in a blaze of glory while docking at Lakehurst, New Jersey in 1937. 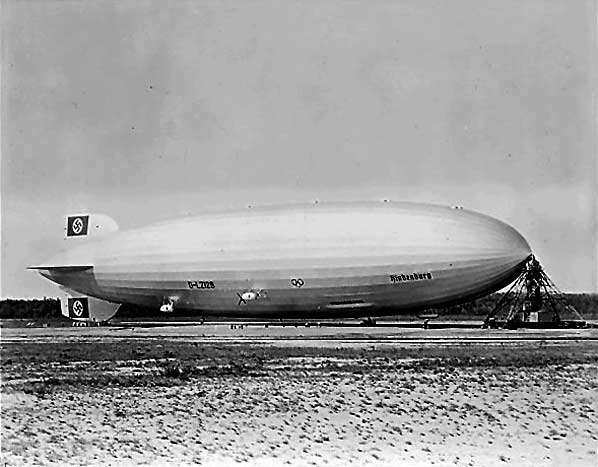 The arrival of the Hindenburg was a major media event so newspaper photographers and radio news reporters anxiously awaited its arrival. The explosion of the greatest Zeppelin was recorded on film and the photograph appeared on the front page of nearly every newspaper in the world. The live radio broadcast, one of the most famous of all time, narrated the event in vivid detail. The reporter clearly relayed the vexing events that he was witnessing such as the flaming human bodies plummeting from the hovering fireball which was glowing like the sun and giving off a similar amount of heat. The publicity of the disaster seared the incident indelibly into the world's collective mind's eye, creating an insurmountable public relations problem for the company. Because of this tragedy, passenger transport by airship ended along with the airship's halcyon age. The Hindenburg's demise was attributed to the explosive hydrogen gas used for buoyancy at the time, but alleged forensic scientific testing later revealed that the true source of the Hindenburg's problem may have been a powdered aluminum coating on the envelope.

It was unfortunate for the Luftschiffbau Zeppelin company that the Hindenburg incident received so much publicity. Until the Hindenburg's fateful arrival in New Jersey, zeppelins had enjoyed an excellent safety record and no commercial passengers had been killed. Zeppelin airships had made hundreds of successful flights safely carrying thousands of passengers, a particularly notable achievement during the early days of aviation. They were actually far safer than any other mode of air transportation in that period. Although the Hindenburg exploded, there were only 35 fatalities out of the 97 people onboard. The zeppelins were the only means of air transportation in that day that could carry that many people successfully and were the earliest form of transatlantic commercial air service. The Luftschiffbau Zeppelin model LZ-130 was completed in 1938, but never saw much use.