The Throne of the Lord 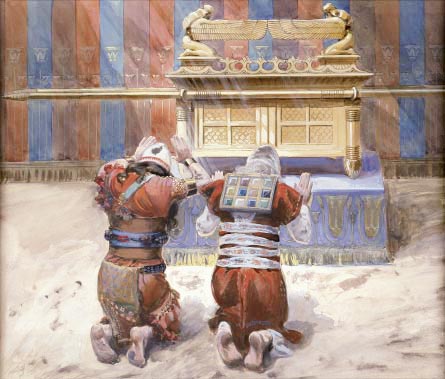 Moses and Joshua in the Tabernacle.
James Jacques Joseph Tissot, circa 1896-1902.

One need not look far into Solomon's kingdom to find some astonishing information. In fact, looking immediately past his ascension, there is an account of his second anointing in both Kings and Chronicles. Solomon was anointed twice and one narrative of the second ceremony appears in 1 Chronicles 29:21-24.

1 Chronicles 29:21 And they sacrificed sacrifices unto the Lord, and offered burnt-offerings unto the Lord, on the morrow after that day, even a thousand bullocks, a thousand rams, and a thousand lambs, with their drink-offerings, and sacrifices in abundance for all Israel; 22 and did eat and drink before the Lord on that day with great gladness. And they made Solomon the son of David king the second time, and anointed him unto the Lord to be prince, and Zadok to be priest. 23 Then Solomon sat on the throne of the Lord as king instead of David his father, and prospered; and all Israel hearkened to him. (JPS) (Emphasis added)

In this instance, we see that Solomon was anointed king a second time before the Lord and that Zadok was also anointed to be priest. This was a second anointing for Zadok as well. Reconstructing this scene from the details presented, it becomes clear that for this ceremony, the group went to the tent tabernacle that David had pitched to house the Ark of the Covenant. As we discovered earlier, going before the Lord generally meant going before the ark. Now, notice in verse 23 that Solomon "sat on the throne of the Lord." Obviously, this must mean that Solomon sat down on the ark - between the two cherubim.

This is only thing that this could mean because this is the only place where the phrase that someone "sat on the throne of the Lord" exists in the Bible regarding a person. There are only two other instances of the phrase "throne of the Lord" being used in the entire Bible with the exception of its usage in one particular paraphrase translation. The other instances of this phrase occur in Exodus 17:16 and Jeremiah 3:17. Jeremiah 3:17 also refers to Jerusalem, something that will need to be examined in greater depth later. Nevertheless, even in these cases, this phrase definitely refers to the Ark.

The phrase, "throne of the Lord," does occur in different passages in the Contemporary English Version of the Bible. Specifically it appears in 2 Samuel 6:2 and Psalms 132:7. This was determined by using searchable text of the following translations: NIV, NASB, MSG, AMP, NLT, KJV, ESV, CEV, NKJV, KJ21, ASV, WE, YLT, DARBY, WYC and NIV-UK.

In Psalm 132:7 in the Contemporary English Version (CEV), the phrase "throne of the Lord" refers to the Ark of the Covenant and in other translations it definitely refers to the ark, but the phrase is usually rendered "footstool" or "dwelling place" of the Lord.

In 2 Samuel 6:2 in the CEV, there is a description of the ark. Recall that God was enthroned between the two cherubim above the mercy-seat on the Ark of the Covenant. Therefore, 1 Chronicles 29:23 has to mean that Solomon sat down on the Ark of the Covenant and the full implications of this will be examined later; it is very important. While one would think that someone sitting on the ark would be immediately smitten, it is important to remember that touching the ark is not necessarily a death sentence because the Lord can have mercy upon whomever He chooses. Furthermore, God can choose special calamities as well.

In contemporary Western society, it might be a bit unclear as to why this would pose any problem. While it would have been unthinkable to sit upon a monarch's throne in times before about the mid-nineteenth century, many people would probably think of it as no big deal today. Nevertheless, it was a big deal and a clear indication that there were aspirations of eminence far beyond being the world's greatest king.

There are actually ancient historical Jewish records of Solomon sitting on the ark in the Holy of Holies after the temple was completed. Obviously, these instances probably involved the counterfeit ark.