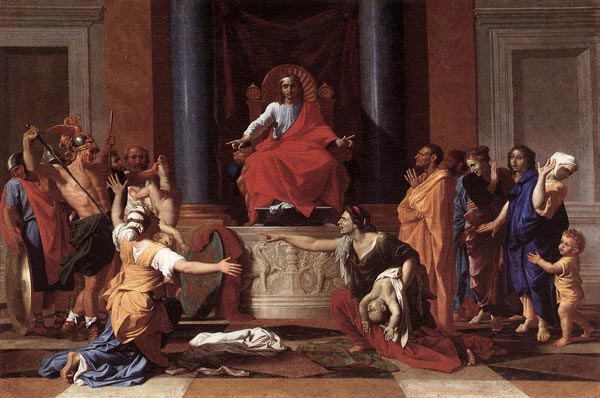 Scripture notes that Solomon displayed exceptional wisdom in judging a dispute between two women over a child. As we saw earlier, the role of the judge in Israel was reserved exclusively for the priests.

"Who is able to judge this Thy great people?"

1 Kings 3:16 Then came there two women, that were harlots, unto the king, and stood before him. 17 And the one woman said: 'Oh, my lord, I and this woman dwell in one house; and I was delivered of a child with her in the house. 18 And it came to pass the third day after I was delivered, that this woman was delivered also; and we were together; there was no stranger with us in the house, save we two in the house. 19 And this woman's child died in the night; because she overlay it. 20 And she arose at midnight, and took my son from beside me, while thy handmaid slept, and laid it in her bosom, and laid her dead child in my bosom. 21 And when I rose in the morning to give my child suck, behold, it was dead; but when I had looked well at it in the morning, behold, it was not my son, whom I did bear.' 22 And the other woman said: 'Nay; but the living is my son, and the dead is thy son.' And this said: 'No; but the dead is thy son, and the living is my son.' Thus they spoke before the king. 23 Then said the king: `The one saith: This is my son that liveth, and thy son is the dead; and the other saith: Nay; but thy son is the dead, and my son is the living.' 24 And the king said: 'Fetch me a sword.' And they brought a sword before the king. 25 And the king said: 'Divide the living child in two, and give half to the one, and half to the other.' 26 Then spoke the woman whose the living child was unto the king, for her heart yearned upon her son, and she said: 'Oh, my lord, give her the living child, and in no wise slay it.' But the other said: 'It shall be neither mine nor thine; divide it.' 27 Then the king answered and said: 'Give her the living child, and in no wise slay it: she is the mother thereof.' 28 And all Israel heard of the judgment which the king had judged; and they feared the king; for they saw that the wisdom of God was in him, to do justice. (JPS)

While Solomon's wise ruling has been widely lauded, perhaps it would be good to look at the system of justice that God set up as recorded in the Bible. There are few mentions of previous kings or leaders deciding matters like this except for Moses while he sat in the Tent of Meeting. Moses obtained his decisions from the Lord, but eventually Moses established another system. It is notable that David appointed 6000 Levites to be officials and judges shortly before his death, but there is no note that they were ever used in that capacity.

1 Chronicles 23:3 And the Levites were numbered from thirty years old and upward; and their number by their polls, man by man, was thirty and eight thousand. 4 Of these, twenty and four thousand were to oversee the work of the house of the Lord; and six thousand were officers and judges; (JPS)

It is extremely significant that the Urim and Thummim still existed at the beginning of Solomon's reign. We know for certain that they existed during David's time because there are accounts of him using them. There is no mention of them after the time of David, but it is highly probable that they were passed on to Solomon's time. The Urim and Thummim were used to inquire directly of God and one of their main purposes was for dispensing justice. They originally belonged to Moses as he states just before his death (Deuteronomy 33:8). This makes it clear that the Lord actually judged the people during the time of Moses. Solomon asked for wisdom so he could judge the people - something that was only to be done by the priests (Deuteronomy 16:19 Thou shalt not wrest judgment.). The word wrest has several meanings all of which are applicable to the way the word is used in Deuteronomy 16:19. One possible meaning is to gain something, in the order of gaining money through robbery. The priests derived their decisions from the Lord so judgment was the Lord's job. The act of usurping the role of the judges was another act that required the death penalty.

Deuteronomy 16:18 Judges and officers shalt thou make thee in all thy gates, which the Lord thy God giveth thee, tribe by tribe; and they shall judge the people with righteous judgment. 19 Thou shalt not wrest judgment; thou shalt not respect persons; neither shalt thou take a gift; for a gift doth blind the eyes of the wise, and pervert the words of the righteous. 20 Justice, justice shalt thou follow, that thou mayest live, and inherit the land which the Lord thy God giveth thee. (JPS)

Job 5:12 He frustrateth the devices of the crafty, so that their hands can perform nothing substantial. 13 He taketh the wise in their own craftiness; and the counsel of the wily is carried headlong. 14 They meet with darkness in the day-time, and grope at noonday as in the night. (JPS) (Emphasis added)

Jeremiah 8:9 The wise men are ashamed, they are dismayed and taken; lo, they have rejected the word of the Lord; and what wisdom is in them? (JPS) (Emphasis added)

It was the duty of the priests to judge matters because they had the means of inquiring of the Lord. Even if one had Solomon's wisdom, why would that person forego the opportunity to inquire of the Lord when meting out justice? After all, it is impossible for humans to know all of the factors in a dispute no matter how wise they are and render truly just decisions. As a case in point consider the hundreds of condemned people that have been released from death-sentences in the United States in recent years due to DNA evidence.

The following passages outline the duties of the Levites in Ezekiel's temple.

Ezekiel 44:24 And in a controversy they shall stand to judge; according to Mine ordinances shall they judge it; and they shall keep My laws and My statutes in all My appointed seasons, and they shall hallow My sabbaths. (JPS)

The kings of Judah apparently judged disputes for a while after the time of Solomon. However, later one will notice that the good king Jehoshaphat re-institutes the system of using the Levites as judges.

2 Chronicles 19:4 And Jehoshaphat dwelt at Jerusalem; and he went out again among the people from Beer-sheba to the hill-country of Ephraim, and brought them back unto the Lord, the God of their fathers. 5 And he set judges in the land throughout all the fortified cities of Judah, city by city, 6 and said to the judges: 'Consider what ye do; for ye judge not for man, but for the Lord; and He is with you in giving judgment. 7 Now therefore let the fear of the Lord be upon you; take heed and do it; for there is no iniquity with the Lord our God, nor respect of persons, nor taking of bribes.' 8 Moreover in Jerusalem did Jehoshaphat set of the Levites and the priests, and of the heads of the fathers' houses of Israel, for the judgment of the Lord, and for controversies. And they returned to Jerusalem. 9 And he charged them, saying: 'Thus shall ye do in the fear of the Lord, faithfully, and with a whole heart. 10 And whensoever any controversy shall come to you from your brethren that dwell in their cities, between blood and blood, between law and commandment, statutes and ordinances, ye shall warn them, that they be not guilty towards the Lord, and so wrath come upon you and upon your brethren; thus shall ye do, and ye shall not be guilty. 11 And, behold, Amariah the chief priest is over you in all matters of the Lord; and Zebadiah the son of Ishmael, the ruler of the house of Judah, in all the king's matters; also the officers of the Levites before you. Deal courageously, and the Lord be with the good.' (JPS)