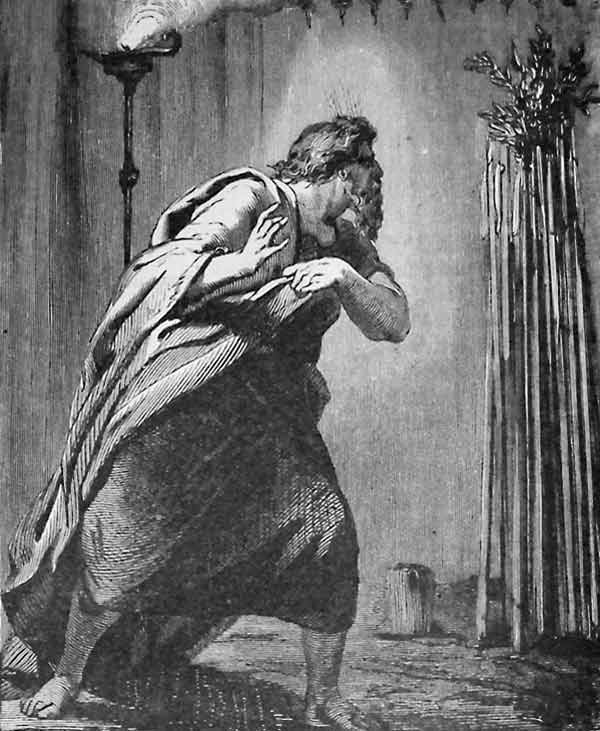 Aaron's Staff that Budded.
From the 1890 Holman Bible.

Aaron's staff that budded has many facets of significance beyond that which is readily apparent. It came into being and was preserved as a witness that the priestly duties were never to be preempted. Part of the events surrounding the creation of this item involved persons that were not of the seed of Aaron burning incense. It was preserved through the generations as a symbol of God's choice of leaders.

The staff was not in the Ark when it was brought into Solomon's Temple. Some have thought that it might have been removed during one of the times when the Ark was not in Israel, but as we discovered earlier, that is not possible. The staff had to have been removed by God because nobody could touch the Ark without being smitten. The reason that the staff was not in the Ark was Solomon. There could be no clearer sign that Solomon was NOT God's choice of leaders and Adonijah was.

Because of the importance of this omen on numerous levels, it would be good to examine in detail how it came into being. It was initially made during a revolt against Moses by some of the Israelites while they were still in the wilderness. The whole story can be found in Numbers chapters 16-17 and the more relevant excerpts are included below.

Numbers 16:1 And Korah, the son of Izhar, the son of Kohath, the son of Levi, made bold, and [with him] Dathan and Abiram, the sons of Eliab, and On, the son of Peleth, the sons of Reuben; 2 and they rose up against Moses, with two hundred and fifty men of the children of Israel, princes of the assembly, summoned to the council, men of renown; 3 and they gathered themselves together against Moses and against Aaron, and said to them, It is enough; for all the assembly, all of them are holy, and the Lord is among them; and why do ye lift up yourselves above the congregation of the Lord? 4 When Moses heard this, he fell on his face. 5 And he spoke to Korah and to all his band, saying, Even to-morrow will the Lord make known who is his, and who is holy; and he will cause him to come near to him; and him whom he has chosen, him will he cause to come near to him. 6 This do: take you censers, Korah, and all his band, 7 and put fire therein, and lay incense thereon before the Lord to-morrow; and it shall be that the man whom the Lord doth choose, he shall be holy. It is enough, ye sons of Levi! (Darby)

Numbers 16:28 And Moses said, Hereby ye shall know that the Lord has sent me to do all these deeds, for they are not out of my own heart: 29 if these men die as all men die, and are visited with the visitation of all men, the Lord has not sent me; 30 but if the Lord make a new thing, and the ground open its mouth, and swallow them up, and all that they have, and they go down alive into Sheol, then ye shall know that these men have despised the Lord. 31 And it came to pass when he had ended speaking all these words, that the ground clave apart that was under them. 32 And the earth opened its mouth, and swallowed them up, and their households, and all the men that belonged to Korah, and all their property. 33 And they went down, they and all that they had, alive into Sheol, and the earth covered them; and they perished from among the congregation. (Darby)

Numbers 16:35 And there came out a fire from the Lord, and consumed the two hundred and fifty men that had presented incense. 36 And the Lord spoke to Moses, saying, 37 Speak to Eleazar the son of Aaron the priest, that he take up the censers out of the burning; and scatter the fire afar; for they are hallowed, 38 the censers of these sinners who have forfeited their life; and they shall make them into broad plates for the covering of the altar; for they presented them before the Lord, therefore they are hallowed; and they shall be a sign unto the children of Israel. 39 And Eleazar the priest took the copper censers, which they that were burnt had presented; and they were made broad plates for a covering of the altar: 40 as a memorial to the children of Israel, that no stranger who is not of the seed of Aaron come near to burn incense before the Lord, that he be not as Korah, and as his band, -- as the Lord had said to him through Moses. (Darby) (Emphasis added)

Nobody but a priest, a descendant of Aaron, was to burn incense before the Lord in any event. The altar that Solomon went before at Gibeon was covered with metal plates made from the flattened out censors of the smitten transgressors Korah and his band as a reminder that nobody that was not of the seed of Aaron could burn incense before the Lord. As an additional symbol of this regulation, the staff was created as a result of these same events.

Numbers 17:16 And the Lord spoke unto Moses, saying: 17 'Speak unto the children of Israel, and take of them rods, one for each fathers' house, of all their princes according to their fathers' houses, twelve rods; thou shalt write every man's name upon his rod. 18 And thou shalt write Aaron's name upon the rod of Levi, for there shall be one rod for the head of their fathers' houses. 19 And thou shalt lay them up in the tent of meeting before the testimony, where I meet with you. 20 And it shall come to pass, that the man whom I shall choose, his rod shall bud; and I will make to cease from Me the murmurings of the children of Israel, which they murmur against you.' 21 And Moses spoke unto the children of Israel; and all their princes gave him rods, for each prince one, according to their fathers' houses, even twelve rods; and the rod of Aaron was among their rods. 22 And Moses laid up the rods before the Lord in the tent of the testimony. 23 And it came to pass on the morrow, that Moses went into the tent of the testimony; and, behold, the rod of Aaron for the house of Levi was budded, and put forth buds, and bloomed blossoms, and bore ripe almonds. 24 And Moses brought out all the rods from before the Lord unto all the children of Israel; and they looked, and took every man his rod. 25 And the Lord said unto Moses: 'Put back the rod of Aaron before the testimony, to be kept there, for a token against the rebellious children; that there may be made an end of their murmurings against Me, that they die not.' 26 Thus did Moses; as the Lord commanded him, so did he. (JPS) (Emphasis added)
(This passage will begin at Numbers 17:1 in most translations)

Even if a priest was a descendant of Aaron, there were certain procedures that had to be followed and certain times for burning very particular incense that was not to be used for anything else. The key point is, Solomon was not a descendant of Aaron. In other passages, note that Solomon burnt incense in the temple after it was completed. To help determine this, note that the altar that was before the Lord was the altar of incense.

1 Kings 9:25 And three times in a year did Solomon offer burnt-offerings and peace-offerings upon the altar which he built unto the Lord, offering thereby, upon the altar that was before the Lord. So he finished the house. (JPS) (Emphasis added)

Through the course of time, various parties tested the incense precept, usually with unfortunate results. Aaron's own sons were some of the first to violate the incense regulations.

The Death of Nadab and Abihu

Leviticus10:1 And Nadab and Abihu, the sons of Aaron, took each of them his censer, and put fire therein, and laid incense thereon, and offered strange fire before HaShem, which He had not commanded them. 2 And there came forth fire from before HaShem, and devoured them, and they died before HaShem. 3 Then Moses said unto Aaron: 'This is it that HaShem spoke, saying: Through them that are nigh unto Me I will be sanctified, and before all the people I will be glorified.' And Aaron held his peace. (JPS)

1 Kings 9:25 And three times in the year did Solomon offer up burnt-offerings and peace-offerings upon the altar that he had built to the Lord, and he burned incense upon that which was before the Lord. So he finished the house. (Darby) (Emphasis added)

Another king, King Uzziah, burned incense before the Lord at a later time. In this case the priests approached the king and asked him to leave the temple because only the priests were allowed to burn incense before the Lord. One could say that the priests kept their courses in this rare instance. Notice also that in light of this a king did not have the authority to remove a priest. It was a requirement that the priests confront someone acting presumptuously - even a king - and this is one of few cases where that was done of the many times that it should have been done. The reason is because the priests bore the responsibility for offenses against the sanctuary as well as the priesthood and they alone were sanctioned by God to perform the priestly function.

When confronted, Uzziah became angry with the priests and the Lord immediately struck him with leprosy right in the temple. The account of this incident is in the following passage from Chronicles.

2 Chronicles 26:16 But when he was strong, his heart was lifted up so that he did corruptly, and he trespassed against HaShem his God; for he went into the temple of HaShem to burn incense upon the altar of incense. 17 And Azariah the priest went in after him, and with him fourscore priests of HaShem, that were valiant men; 18 and they withstood Uzziah the king, and said unto him: 'It pertaineth not unto thee, Uzziah, to burn incense unto HaShem, but to the priests the sons of Aaron that are consecrated it pertaineth to burn incense; go out of the sanctuary; for thou hast trespassed; neither shall it be for thy honour from HaShem God.' 19 Then Uzziah was wroth; and he had a censer in his hand to burn incense; and while he was wroth with the priests, the leprosy broke forth in his forehead before the priests in the house of HaShem, beside the altar of incense. 20 And Azariah the chief priest, and all the priests, looked upon him, and, behold, he was leprous in his forehead, and they thrust him out quickly from thence; yea, himself made haste also to go out, because HaShem had smitten him. 21 And Uzziah the king was a leper unto the day of his death, and dwelt in a house set apart, being a leper; for he was cut off from the house of HaShem; and Jotham his son was over the king's house, judging the people of the land. 22 Now the rest of the acts of Uzziah, first and last, did Isaiah the prophet, the son of Amoz, write. 23 So Uzziah slept with his fathers; and they buried him with his fathers in the field of burial which belonged to the kings; for they said: 'He is a leper'; and Jotham his son reigned in his stead. (JPS)

While it might not be clear, this is exactly what should have been done with Solomon. In fact, there are many such acts of Solomon for which he should have been removed from the temple, or in most cases, killed; but as ill fate would have it the priests and Israelites failed to carry out their duties.