Solomon goes before the Ark 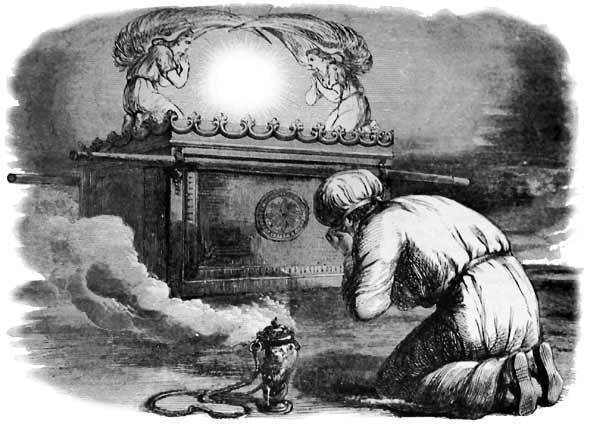 When Solomon left Gibeon, he returned to Jerusalem and went before the Ark of the Covenant and offered more sacrifices.

The Torah reserved these activities for the priests that were descendants of Aaron and the altar at Gibeon was the very same altar that had been covered with the flattened-out censors of Korah and his band as a reminder that no one other than a direct descendent of Aaron was to enter into the presence of the ark. Scripture does not state that Solomon made any special preparations for this and therefore it is unlikely that he did. Anyone approaching the ark was supposed to first be consecrated and it was not normally a good idea to go before the ark whenever one pleased anyhow. It is worthwhile to note that part of the conditions for entering into the sanctuary required that a person abstain from sexual relations for three days ahead of time. One would think that this requirement would be difficult to comply with for a man needing 1000 ladies.

Leviticus 16:1 And HaShem spoke unto Moses, after the death of the two sons of Aaron, when they drew near before HaShem, and died; 2 and HaShem said unto Moses: 'Speak unto Aaron thy brother, that he come not at all times into the holy place within the veil, before the ark-cover which is upon the ark; that he die not; for I appear in the cloud upon the ark-cover. 3 Herewith shall Aaron come into the holy place: with a young bullock for a sin-offering, and a ram for a burnt-offering. 4 He shall put on the holy linen tunic, and he shall have the linen breeches upon his flesh, and shall be girded with the linen girdle, and with the linen mitre shall he be attired; they are the holy garments; and he shall bathe his flesh in water, and put them on. (JPS)

There is another mention of a king going before the ark to offer sacrifices in 2 Samuel 6:16-19. This account is similar to what is recorded about Solomon. However, this instance of David going before the ark to make sacrifices is also recorded in 1 Chronicles 15:25-27 and there are major differences. For one thing, it is noted in Chronicles that the priests were present with David during this incident and they were ministering before the ark. Immediately after the account about "they offered sacrifices," the tense changes to singular and it says that, "David finished sacrificing." Therefore, it is certain that the priests performed the services for David. Furthermore, David was clothed in a robe of fine linen as were the priests and he also wore a linen ephod, the prescribed attire for going before the ark. This occurred when the ark was brought into the City of David from the house of Obed-Edom where the ark had been kept after the death of Uzzah. Although it does not specifically say that David had consecrated himself, it is noted that he told all of the Levites to consecrate themselves. Therefore, it is unimaginable that David had not done this.

Duties of the Priests and Levites
Numbers 18:1 And HaShem said unto Aaron: 'Thou and thy sons and thy fathers' house with thee shall bear the iniquity of the sanctuary; and thou and thy sons with thee shall bear the iniquity of your priesthood. 2 And thy brethren also, the tribe of Levi, the tribe of thy father, bring thou near with thee, that they may be joined unto thee, and minister unto thee, thou and thy sons with thee being before the tent of the testimony. 3 And they shall keep thy charge, and the charge of all the Tent; only they shall not come nigh unto the holy furniture and unto the altar, that they die not, neither they, nor ye. 4 And they shall be joined unto thee, and keep the charge of the tent of meeting, whatsoever the service of the Tent may be; but a common man shall not draw nigh unto you. 5 And ye shall keep the charge of the holy things, and the charge of the altar, that there be wrath no more upon the children of Israel. 6 And I, behold, I have taken your brethren the Levites from among the children of Israel; for you they are given as a gift unto HaShem, to do the service of the tent of meeting. 7 And thou and thy sons with thee shall keep your priesthood in everything that pertaineth to the altar, and to that within the veil; and ye shall serve; I give you the priesthood as a service of gift; and the common man that draweth nigh shall be put to death.' (JPS)

Numbers 18:22 And henceforth the children of Israel shall not come nigh the tent of meeting, lest they bear sin, and die. 23 But the Levites alone shall do the service of the tent of meeting, and they shall bear their iniquity; it shall be a statute for ever throughout your generations, and among the children of Israel they shall have no inheritance. (JPS) (Emphasis added)

Notice that the preceding passages do not say, “except Solomon.” Ezekiel gives further explanation of the role of the Levites in the subsequent section. One will notice that the practices are much the same as those that were outlined by Moses.