The term cannon generally refers to large-caliber artillery pieces that use explosives as a propellant. Generally, cannon have long barrels in relation to their caliber and are aimed at elevations below 45°.

The terms culverin, cannon-of-battery and pedrero were used around the 16th century, to describe specific types of artillery. Culverins were long guns and the length of their bores were about 30 times their diameter. The relative length of guns is frequently expressed in calibers, or multiples of the bore's diameter. 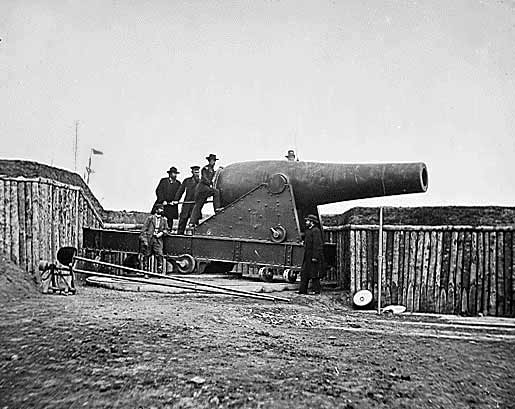 Cannon-of-battery were so named because they were primarily used to batter and pulverize fortress walls. They normally had bores 20-25 calibers long. Pedreros were short, smooth bore guns that used stone ammunition and they had lengths around 8-10 calibers. They were normally used in siege and naval warfare.

There was a preference in siege warfare to cut into the walls of stone fortifications with cannon firing cast-iron shot near the bottom of the wall. After a wall was sufficiently battered in this way to create a groove, stone shot, from either a pedrero or a trebuchet, would be fired higher up to crumble the wall.