As armament builders improved their craft during the fifteenth century and into the sixteenth, the race was on to develop larger and larger weapons. In fact, some of the weapons of this period were much larger caliber than any artillery since that time. 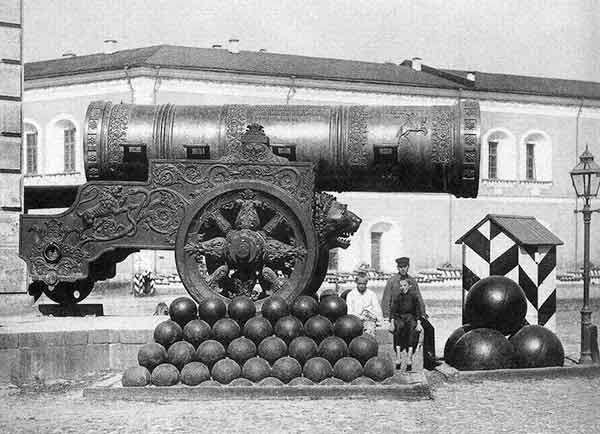 The largest recorded caliber gun ever made was the Great Mortar of Moscow known vicariously as the Tsar (Czar) Cannon, built in 1586. It has a caliber of 36 inches or 914.4mm and is about 16.25 feet or 5 meters long. It reputedly weighs over 85,000 pounds avoirdupois (38000 kg). Tsar Fyodor I, son of Ivan IV, commissioned Andrei Chokhov to cast this great gun. It was designed to fire stone projectiles weighing about 2000 pounds or 900kg or some type of multiple shot such as grapeshot. The gun reputedly has never been fired, and therefore, still exists today at the Kremlin.

Another of the famous great guns is Mons Meg, currently located at Edinburgh Castle in Scotland. It is the surviving gun of a pair made for the Duke of Burgundy in 1457. Mons Meg was made as a siege gun and constructed of iron bars that were welded together at Mons, now in Belgium. The caliber of Mons Meg was 19.5 inches / 0.5m and it fired stone projectiles that weighed upwards of 330 pounds / 150kg. It is alleged that Meg could achieve a range of 1.5-2 miles / 2.4-3.2km. However, some experts believe that it is unlikely that the gun had any accuracy beyond about 300 yards / 274m. Because of the problems caused by its large size, the gun fell into disuse as a weapon; but Meg was kept for ceremonial use. The gun exploded in 1681 when it was fired as a birthday salute for the Duke of Albany. The ruined gun was dumped, but remembered fondly. Later, the gun was recovered and repaired as a museum piece, but it has never been fired since. 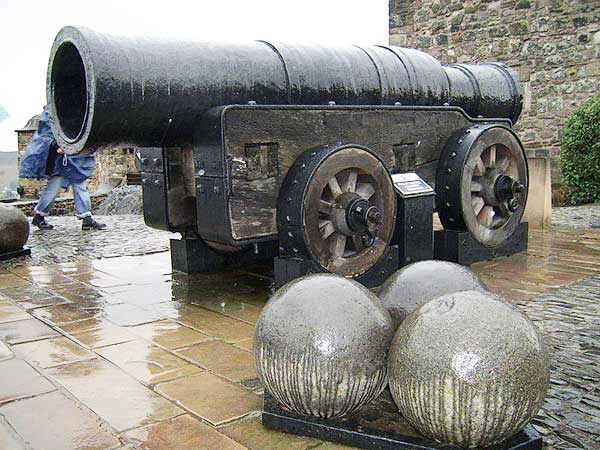 The very large guns of this period were limited in usefulness due to their enormous size. They used ammunition that was difficult to make and handle so they were primarily used for defending well-equipped fortresses. Any value they might have had in sieges was restricted to operations planned well in advance. The enormous guns were extremely heavy and their weight made them nearly immobile - not a good characteristic for a siege weapon. The Czar Cannon reputedly weighed over 42 tons / 38000 Kg. Light by comparison, Mons Meg weighs over 6 tons / 5500kg and legend has it that it could only be moved about 3 miles / 4.8km a day at top speed. Nevertheless, the Scots used the gun against the English at the siege of Norham Castle in 1497.

The stone projectiles of the period were a great limitation because it required a skilled stone carver to form the stones into spheres that would fit the guns. Obviously projectiles made this way could be severely out of balance. Nevertheless, stone is plentiful in many areas and an army could avoid transporting ammunition in many cases by taking stone cutters along on a campaign.