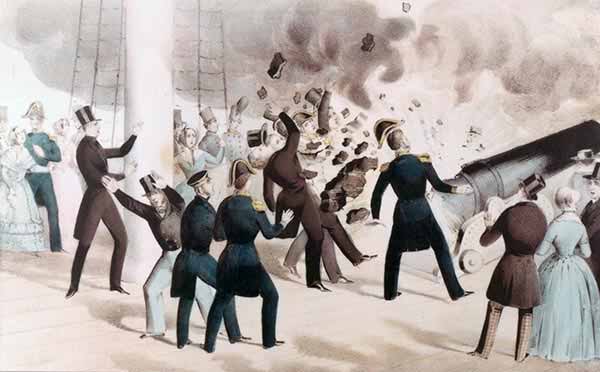 Awful Explosion of the gun "Peace Maker" on board the U.S. Steam Frigate Princeton on Wednesday, 28 February, 1844.
(Perhaps it would have been more aptly named the "Widow Maker.")
Lithograph; published by N. Currier, New York, 1844.
It depicts the explosion of a heavy gun on board USS Princeton, in the Potomac River, which killed or mortally wounded seven and injured about twenty people.
Some of those present are identified below the image, including (from left): Mr. Wilkins; Mr. Perrine; Lieutenant Hunt; Representative Virgil Maxcy, of Maryland; Secretary of State Abel P. Upshur; Captain Beverly Kennon, Chief of the Bureau of Construction, Equipment and Repair; Thomas Gilmer, Secretary of the Navy; Captain Robert F. Stockton; Sailors; Senator Phelps and Senator Thomas Hart Benton.
Maxcy, Upshur, Kennon and Gilmer were among those killed. Stockton and Benton were among the injured.
Naval History and Heritage Command.
United States Navy.
Washington Navy Yard; Washington, D.C.

Early cannon were about as dangerous to fire as they were to an opposing army. Many of the advancements by trial-and-error resulted in guns that were too dangerous to use. This was the case with an innovation by Gustavus II Adolphus of Sweden who introduced a leather gun 1626. The gun used a leather-wrapped copper tube for an almost composite construction and the total weight of the gun was reduced to about 90 pounds. The gun had a serious problem with overheating which caused it to be so dangerous that it was abandoned in 1631 for heavier, but safer, guns.

The gun from the USS Princeton which was a mate of the "Peace Maker".
Note the damage its projectile could do as demonstrated on the right. Ericsson built this twelve inch smooth-bore gun in England and brought it with him to the United States.
Naval History and Heritage Command.
United States Navy.
Washington Navy Yard; Washington, D.C.

This was not the only problem with dangerous cannon. Cannon continued to be extremely dangerous to operate at least until cast steel models became commonplace. The most common problem was that the cannon tube would occasionally explode near the breech when firing. Several prominent people lost their lives when cannon exploded. In addition to the thousands of troops lost to exploding cannon, an exploding cannon killed King James II of Scotland at Kelso in 1460. In more recent times, an exploding cannon killed US Secretary of State Abel Upshur aboard the ship USS Princeton in mid-March 1844. 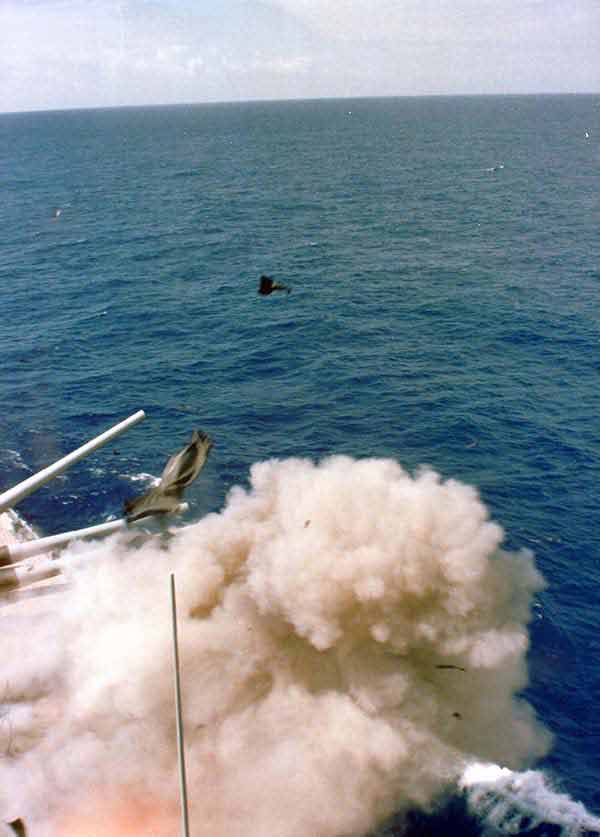 A photo taken from the bridge captures the explosion of the No. 2 16-inch gun turret aboard the battleship USS Iowa (BB-61). It was later determined that 47 sailors were killed by the blast, which occurred as the Iowa was conducting routine gunnery exercises 330 miles northeast of Puerto Rico; 4/19/1989.
Photo: Lieutenant Thomas Jarrell.
United States Navy.
National Archives and Records Administration.
Still Picture Branch; College Park, Maryland.