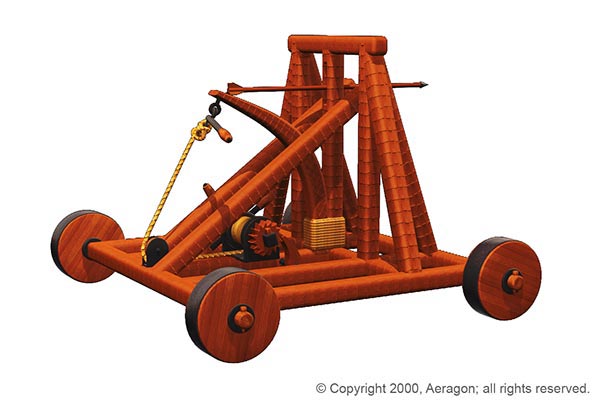 Ballistae occurred in various sizes, and, in some cases, could launch ammunition as large as catapults and trebuchets did. In smaller examples they launched ammunition like arrows, bolts and darts. Some were capable of launching multiple pieces of ammunition at one time. Obviously, there were several different configurations of mechanisms. In one variation the mechanism functioned similar to that of the crossbow where a bowstring propelled the projectile. In another type green wood was used to create the elasticity.

In the bowstring type of ballista there were several variations of the method used to create the initial force of the mechanism. The complex mechanism favored by the Romans worked by means of creating torsion upon two lengths of rope by twisting them and they transferred that force to two arms to which the projectile driving cord was attached. Roman ballistae were normally mounted on wheels.

The ballista had much better accuracy than the catapult, but its range was shorter. Some ballistae of the Roman era could launch a stone of about 27-kilograms, or 60 pounds avoirdupois, and had a range of about 460 meters or 500 yards.

It is known that Julius Caesar supported the landing of Roman troops in Britain in 57 BC with fire from ballistae and catapults.