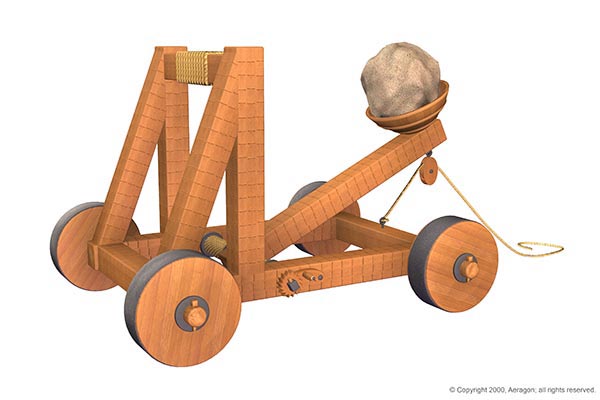 The word catapult is sometimes applied to several different types of mechanical artillery, but when used here it will be in the narrow sense of the word specifically referring to catapults that have a single arm rotating in a vertical plane. Other types of siege engines that are sometimes referred to by the word catapult are classed under their more specific names, such as ballistae. The words ballistae and catapult, from the Latin catapulta, appear to have exchanged meanings since ancient times. Other types of catapults can be found today that launch missiles or aircraft, especially on aircraft carriers.

Early in antiquity, armies used catapults to assault adversaries as well as for defense in conflicts. It is known that they were used extensively by the Romans. Roman armies used several types of mechanical artillery and called their catapult the onager, after the wild ass, because of the way it bucked from recoil when fired. The catapult was also used in medieval times, but the medieval catapult was reputedly inferior to the Roman version.

Catapults exploited the properties of elastic materials such as animal sinew, green wood or twisted fibers to propel a projectile. They had much greater range and could launch larger projectiles than hand weapons. It is interesting to note that catapults were still used as late as World War I. During World War I, troops in the trenches fashioned catapults by hand and used them to launch grenades and poison gas canisters behind enemy lines. This appears to be the last military use of mechanical artillery. It seems that the only remaining use of mechanical artillery catapults is for hobby and recreation. Today, aircraft carriers have steam catapults to launch aircraft, but these are really quite different from artillery.