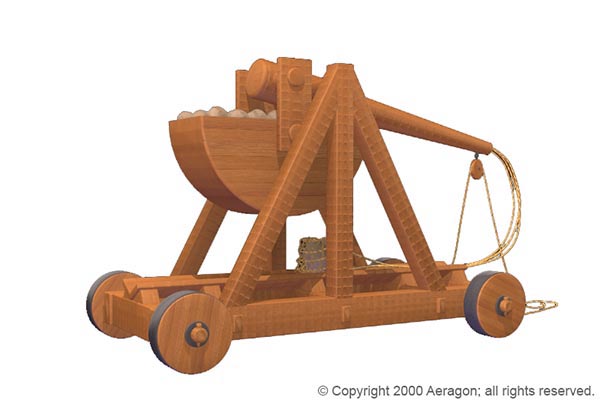 Another artillery piece that was similar to the catapult in functional principle, but appeared much later, was the trebuchet. The first known trebuchets appeared in medieval Europe in the 12th century. The trebuchet is probably the engineering marvel of entire medieval period. Trebuchets were the only known exception to the rule that ancient artillery was technically far superior to medieval artillery. The trebuchet was not only the engineering marvel of medieval Europe, but also, it probably hastened the end of the medieval period. It did this by simply ending the usefulness of medieval fortifications, or castles.

The primary difference between the catapult and the trebuchet was that the catapult used elasticity as its power source while the trebuchet used a counterweight for power. This was an enormous advantage in earlier times when elastic materials were difficult to obtain. Another significant advantage of trebuchets over catapults is that trebuchets did not have a stop position to the mechanism and this greatly reduced wear and tear on the machine. Counterpoise siege engines largely replaced the catapult by the middle of the 13th century.

Although nearly anything could be thrown by a trebuchet, the preferred ammunition was spherical stone shot that could be as large as 300-pounds, or 135-kilograms, according to modern estimates. The counterweight of a large trebuchet could be as much as 10 tons, or 9100 kilos, and the throwing end of the arm could be 50 feet, or 15 meters long. Some trebuchets had a hollowed out cavity to hold the ammunition while others used a sling. Slings increased the range substantially and it is believed that this type had a range of at least 300 yards, or 275 meters. It is believed that the trebuchets were remarkably accurate and known that they could do serious damage to the fortifications of the period. Small trebuchets were used to clear archers and crossbowmen from defensive positions.