Sir George Cayley of England studied the idea of flight in a heavier-than-air device around 1810. Cayley is known as the father of aviation in Britain. He built gliders to study flight and put forth the basic idea of the airplane as well as proposing an aerial carriage in 1843. Cayley’s aerial carriage combined the principles of an airplane and a helicopter, but Cayley never attempted to build such a device. 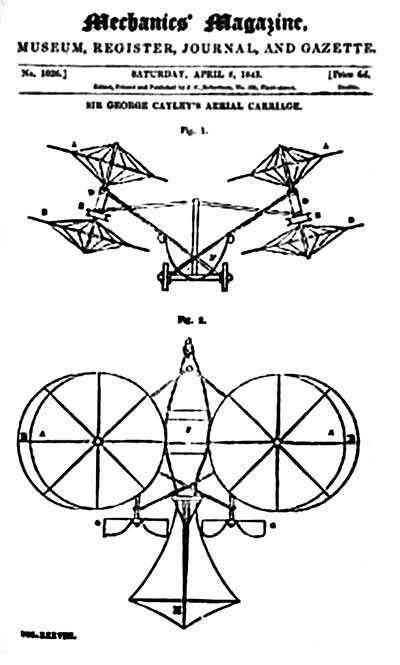 “Sir George Cayley's Aerial Carriage,” in Mechanics' Magazine, April 8, 1843.
During 1809 and 1810, the brilliant English engineer George Cayley (1773–1857) laid the foundation for what would be called “aeronautical engineering.” Caley published several articles that mark the first steps toward heavier-than-air flight. He realized that the main problem for achieving flight lay in making “a surface support a given weight by the application of power to the resistance of air.” In 1843, Cayley designed an “aerial carriage” that featured rotating blades that could be converted into fixed wings for forward flight.
Library of Congress, General Collections, Washington, D.C.