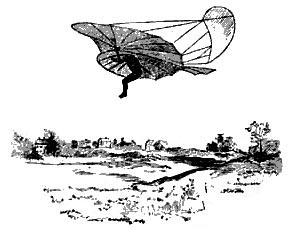 Roger Bacon, the famous English Friar and alchemist, put forth an idea for an ornithopter in about 1250 AD. Ornithopters flap their wings like a bird to achieve flight. The ornithopter was never successful until very recently. Bacon also visualized the balloon and theorized that one could be given lift with either ether or phlogiston.

Ether was believed to be an element in early chemistry, or alchemy, that filled the upper regions of space. It was not until the Michelson-Morley experiment of 1887 that ether was shown to not exist. Phlogiston was another alchemical element and was thought to be the material substance of fire.

Roger Bacon had many difficulties in his life due to his work in science and technology and was thought to be a wizard or crackpot, or both. In fact, he was locked up in a Paris monastery for several years due to his unconventional views. His contemporaries thought that his work surely involved magic and some of it may have actually been magic. There was a link between alchemy and occult practices. Nevertheless Roger Bacon made many discoveries and recorded a lot of information that was not appreciated until long after his death.

Casting an eye toward the future Bacon wrote:
"Ships will go without rowers and with only a single man to guide them. Carriages without horses will travel with incredible speed. Machines for flying can be made in which a man sits, and skillfully devised wings strike the air in the manner of a bird. Machines will raise infinitely great weights, and ingenious bridges will span rivers without supports."

Bacon was not exonerated from being a crackpot until the twentieth century - more than 600 years after his death. There is a manuscript in code that he may have written that has never been deciphered although it was attempted by World War II code breakers.