A first known cannon that fired iron darts certainly existed in the 1300s. The darts were wrapped with leather as a gasket to prevent windage, or the leaking of the propellant gas from around the projectile. The darts were somewhat like harpoons and were sometimes called garros. The gun was fitted to a trestle-type table and it had no provision for aiming or changing the elevation of the barrel. It also had no means of counteracting recoil, so it must not have been very powerful. It is also interesting to note that the bore on some very early guns did not appear to maintain a consistent diameter throughout their length. They were shaped more like clay vessels than cylinders. 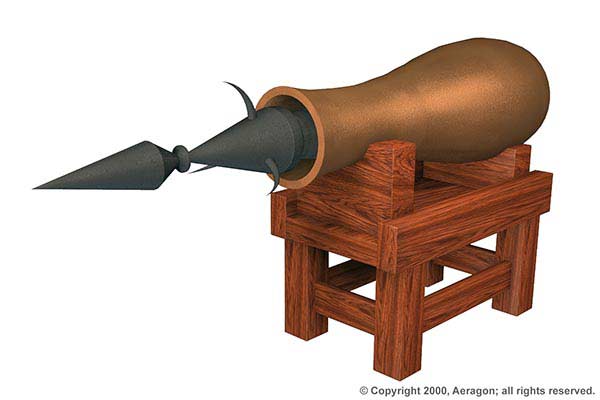 An Approximation of the First Cannon.
Image: © 2000 Aeragon; all rights reserved.

Although explosively-powered guns proliferated rapidly, mechanical artillery stayed in common use for several more centuries. This may have been partially due to the unreliability of early guns and powder. Until powder makers developed the corning process early in the 15th century, powder was extremely unpredictable. Mechanical siege engines were certainly still in use during the reign of King Henry VIII in England (1508-1547). It was not unusual to see both types of artillery in use by the same army in the same battle.