Cheese was another foodstuff that could be stored for long periods and Roman troops were known to make widespread use of it. The Roman army exposed the world that they conquered to cheese, thus spreading the process worldwide, eventually. Since cheese was popular, Rome was heavily engaged in cheese trade. 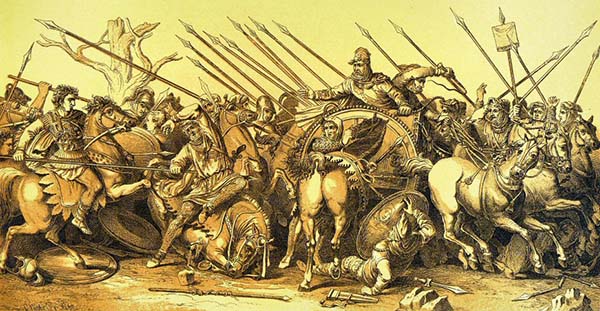 Reconstruction of the mosaic depiction of the Battle of Issus after a painting by Apelles found in the House of the Faun at Pompeii, published 1893.
Wikimedia Commons.

Romans had developed processes for making cheese using rennet and also spread this technology worldwide. Rennet can be obtained from the juice of fig trees, wild thistle, saffron seed - or - most often, the stomach of a still-nursing animal such as a calf, lamb or kid goat. Since most Roman soldiers were from agricultural backgrounds, they were adept at making wide varieties of cheese. These cheeses were much harder and could be kept much longer than the softer cheeses made with other methods in different locales and the flavor improved with aging. Soft cheese deteriorates rapidly. This was particularly helpful when Roman cheese making skill was transported to Northern Europe where cows were the main source of milk rather than the sheep and goats that were common around the Mediterranean.